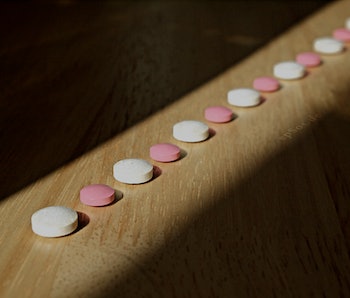 The medical community can’t seem to make up its mind about amphetamines. For years, they were considered a cure-all, used to treat illnesses ranging from hangovers to depression to nausea. Then users discovered the drug’s euphoric rush — not to mention addictive properties — and doctors helped the government put the “little helpers” under regulatory lock and key. That was 40 years ago. Now, doctors are bringing them back to treat a specific weight-related issue: binge eating disorder.

Mother Jones reports that the drug Vyvanse, an amphetamine, is now being prescribed to treat the disorder, which is a relatively common condition in adults. The symptoms are quite simple and, it is worth noting, broadly diagnosable. Sufferers regularly overeat then feel upset after an eating. Vyvanse helps by controlling that compulsive behavior and quelling the appetite.

This all seems pretty straightforward — that is, until you consider that Vyvanse is a Schedule II federally controlled substance, which means that it can be used medically but is also known to have a high potential for abuse. It traces its lineage back to the drug Obetrol, a widely used diet pill in the 1960s that’s now been rebranded as the ADHD drug Adderall. Shire, the pharmaceutical company that markets Vyvanse and pays for BingeEatingDisorder.com, has used the drug since 2007 to treat ADHD, but this is the first time it’s been used to treat binge eating disorder.

This isn’t, however, the first time amphetamines have been used to treat weight-related issues. After they were widely adopted as an antidepressant in the 1940s and used by sleepy soldiers during World War II, they became a common weight loss tool. In 1947, the American Medical Association (AMA) approved advertising amphetamines for weight loss, and their sales skyrocketed. By the 1960s, brightly colored, amphetamine-containing “rainbow pills” were widely prescribed. There were — to be unsubtle — a lot of speed freaks running around. Not surprisingly, it wasn’t long before the effects of widespread consumption, including amphetamine psychosis, addiction, and paranoid symptoms, became apparent.

Vyvanse was developed to be as effective as traditional amphetamines but to have less potential for abuse. Clinical studies do show that the drug can successfully curb obsessive-compulsive binge-eating behaviors, but these benefits don’t come without a catch: Side effects include psychotic or manic symptoms, delusional thinking, and mania. Shire insists that it’s perfectly safe when used correctly, but many physicians are wary.

It’s hard to blame the skeptics, considering the immense social and economic implications of the last amphetamine epidemics. Yet, government officials are finding it especially hard to regulate a substance that when used incorrectly is incredibly harmful, but is quite helpful when used properly. Amphetamine use to treat ADHD in both children and adults has already got physicians nervous about the “return to medical normalization”. When it comes to these potentially addictive drugs, is it best to err on the side of caution?

More like this
Mind and Body
6.30.2022 11:00 AM
Male birth control is at our fingertips. Will we ever grasp it?
By Elana Spivack
Science
6.28.2022 10:00 AM
How are drugs absorbed in the body? The science of medicine, explained
By Tom Anchordoquy and The Conversation
Mind and Body
5 hours ago
How to spot a liar using a classic mathematical trick
By Dorje C Brody and The Conversation
Related Tags
Share: