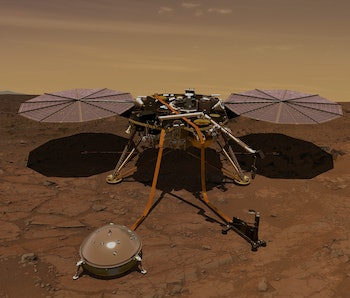 Less than a month from when NASA’s InSight Mars lander is slated to launch towards the red planet on May 5, the team of scientists involved is putting the final touches on the spacecraft. Aside from polishing its two circular solar panels, that includes keeping anyone’s hands, tongues, and spit off of the lander.

NASA is determined to keep InSight as spotless as humanly possible during all the pre-launch preparations for two reasons. First, the Martian probe has cost nearly $1 billion since the space agency began its construction in May 2014. Secondly, NASA is bound by an international treaty that explicitly states interplanetary missions should not contaminate their target celestial body with any gross human germs.

The United Nations Outer Space Treaty was made official in 1967 and states that all space exploration should strive to keep human bacteria out of the cosmos. That’s easier said than done, seeing as the human body is home to trillions of bacterial cells, so NASA started an Office of Planetary Protection to ensure precautions are carried out.

InSight is classified as a Category IVa mission, which means there’s a significant chance it could cause contamination that “could jeopardize future biological exploration.” Ryan Hendrickson, a NASA planetary protection engineer, told Wired this means only “300,000 spores” can be present on the spacecraft when it launches.

“If you piled those all into one place, they would probably fit on a hangnail,” explains Hendrickson.

For this reason, InSight has been sequestered in a completely sanitized “cleanroom” at the Vandenberg Air Force Base in California. Anyone that wants to enter this chamber of cleanliness has to be sterilized from head to toe and slip into some coveralls. The probe will stay quarantined until it’s time for it to be launched into space.

The probe will blast past the atmosphere aboard a United Launch Alliance Atlas V-401 rocket. Once it reaches Mars the stationary lander will pick up the seismic waves created by marsquakes — you know, like earthquakes, but on Mars — to map the planet’s interior. This data will give astronomers an idea of how rocky planets, like Earth, formed in our solar system billions of years ago.

So as long as nobody licks InSight on launch day, it should touch down on Mars with no more than a couple hundred thousand bacterial stowaways.