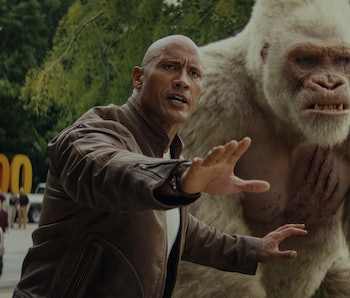 Haters will try to tell you that Rampage, the new movie about the Rock and the giant albino gorilla he loves, is dumb and bad. They’re only half right, as it is indeed a very dumb movie, but quite an entertaining flick. You should see it, and you should stay until the end — but don’t bother sitting through the credits. There is no post-credits scene, and as a result, there’s a question that goes unanswered.

This post contains some spoilers for Rampage, but not any that you wouldn’t have already guessed.

So, George, the albino gorilla who grows to tremendous proportions, survives at the end of Rampage’s big climatic battle atop Chicago skyscrapers. This isn’t really a spoiler, because Dwayne “the Rock” Johnson already said that George survives until the end. In a profile in Rolling Stone, he recounted how the original script for the film did have George dying after making a heroic sacrifice, but he demanded the ending be changed because the Rock doesn’t do downer endings.

“My problem is I have a relationship with an audience around the world,” he told Rolling Stone. “For years I’ve built a trust with them that they’re gonna come to my movies and feel good.”

Because of this, George is alive at the end of the movie, but he’s still gigantic. The Rock’s character, Davis Okoye, remarks that they need to find George a new place to live now that he’s way too big for the San Diego Zoo, and the pair walk off. It’s corny, charming, and curious. Where are they gonna find a home for George? Are they gonna find him his own Skull Island (as seen in the movie Kong: Skull Island, which was also produced by Warner Bros.)?

It’s a question that’s begging for a post-credits sequence to answer, yet no post-credits scene ever comes. That’s fine. There’s no talk of a Rampage 2 yet, and not everything needs to be a full-length trailer for the next full length trailer. When the credits start to roll during your screening of Rampage, feel free to get up and leave, knowing that George’s new home is in your imagination.

More like this
Entertainment
Jan. 16, 2023
The Last of Us Episode 1’s ending, explained
By Jake Kleinman
Entertainment
Jan. 28, 2023
Where and how to watch the 2023 Oscar nominees
By Mónica Marie Zorrilla
Entertainment
Jan. 27, 2023
Onyx the Fortuitous and the Talisman of Souls is a cringe comedy as overlong as its title
By Andy Crump
LEARN SOMETHING NEW EVERY DAY.
Related Tags
Share: