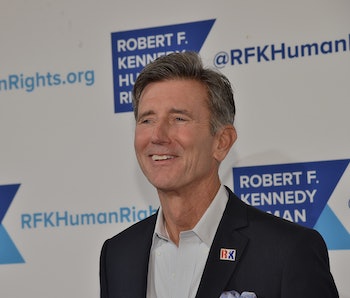 For the many dark convolutions the new season of True Detective sees fit to sling at its viewers, let it not be said that it doesn’t have a sense of humor. This season’s fifth episode, “Other Lives,” featured the talents of one Matt McCoy — most recognizable, to me at least, for his two-episode turn as Lloyd “Serenity Now” Braun on Seinfeld 20 years ago. Last night McCoy was playing a shitheel attorney for the shitheel actress who has been claiming Taylor Kitsch’s closeted highway patrol officer Paul Woodrugh tried to shake her down for a blowjob. McCoy is a funny guy when he wants to be, but the True D bit part lets him show off a priggish prickishness, perfect for a snake-charmer of a lawyer.

There was no reason he should’ve stolen that particular scene, except for a quirk in McCoy’s C.V., namely, that his previous acting credit was also a short stint as a California civil lawyer on a Sunday-night HBO show. It was McCoy, as Pete Monahan, a disgraced and disbarred law-talking guy, who steadied himself long enough to get the Pied Piper gang through a near-disastrous arbitration hearing at the end of the second season of Silicon Valley.

What does this all mean? Nothing, maybe. Coincidence for a career character actor, worth noticing if you’re the sort, as I am, who can’t even figure out how to turn a television on unless it’s about 8 p.m. on a Sunday, and HBO is on tap. Or something more significant, maybe. Confirmation, at the very least, that certain time slots are a flat circle.

More like this
Entertainment
2 hours ago
'Umbrella Academy' Season 3 release date, trailer, cast, and plot for the Netflix superhero series
By Mae Abdulbaki and Mike Bloom
Entertainment
5.18.2022 9:36 PM
Kate Siegel says Netflix’s Fall of the House of Usher is “like nothing anyone has ever seen”
By Dais Johnston
Entertainment
5.18.2022 3:49 PM
Rick and Morty: The Anime could fix the show’s biggest problem
By Corey Plante
Related Tags
Share: