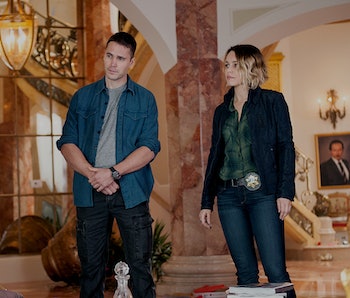 Last week, we got thrown for our first loop — Nic Pizzolatto seemed to kill off his strongest character (Colin Farrell’s Ray Velcoro) with a couple of shotgun blasts from a bird-headed stranger. That cliffhanger sparked a week of speculation about Velcoro’s fate and whether the show would even be worth watching without him. Ultimately, given the myriad clues in the show’s promotion (e.g., preview photos and IMDB pages), it seemed like Ray would stick around somehow, even if just in flashback scenes, à la Season 1.

We weren’t made to wait long. Episode 3, “Maybe Tomorrow,” begins like something straight out of Twin Peaks (frequently suggested as an inspiration for Season 1) with a musical number from a surreal, cheesy country lounge-singer.

Ray sits and watches the performance with his father, who “made [him] nervous,” he says. Things get even Lynchier when the camera pans out to show a big hole in Ray’s gut. Shortly after, Ray wakes up, quashing any possibility of a glimpse into his idea of the afterlife. Instead, he’s got some cracked ribs and serious bruising, having been shot by some sort of rubber bullets.

Ray’s (not-too-)near-death experience was the jolt that he and the show both needed. He, for now, isn’t drinking because “booze tends to take the edge off, [and he wants] to stay angry.” He visits a doctor. He brings his dad weed. He doesn’t even beat the hell out of the nearest person when his ex-wife comes by to try bribing him into relinquishing custody of their son. He’s making some progress.

Ray is now firmly established as the show’s most compelling character. He’s getting pulled in many different directions. He’s caught between loyalty to his job and the mob, and seems to be recovering a sense of righteousness and morality, contrasting his heretofore complacence. Ray is not dark for the sake of darkness; he just can’t find any light.

Ani Bezzerides and Paul Woodrugh also show some serious character development in “Maybe Tomorrow.” The pair are sent out together on field duty, trying to find any connections they can to Ben Caspere. Among their stops is a trip to the Mayor of Vinci’s Bel Air mansion, notable mostly for its extravagance. Woodrugh – because he is so darn pretty – is also tasked with approaching sex workers in hopes that they’ve serviced Caspere.

Woodrugh, in particular, has a stellar episode. An Iraq War veteran, he fights hard to maintain a semblance of heteronormative masculinity – popping Viagras, presumably, all day. He’s (literally) been quiet all season, but now we know why. After getting drunk at a dirt bike race with his army buddy, we learn that the two were in love (to put it mildly) for three nights during the war. His friend won’t let go of the experience, but Woodrugh wants to get as far away as possible. The “closeted homosexual male” trope is a long played-out plot device, but in a show where motivations are typically vapid (sans Ray), Woodrugh’s conflict is quite welcomed.

Our most despicable character, Frank Semyon, had a lackluster episode. His first scene begins with his wife, Jordan – who still has not been developed much – trying to “help” him obtain a semen sample at the fertility clinic. Frank’s “limp dick,” as Jordan says, is his most defining feature. He always does exactly what you think he will do. The Russian businessman seems to be fucking him over on this still-vague land deal with Caspere? He gets pissed. The gold-grilled Danny Santos tries to tell him he’s over the hill? He extinguishes the grill, so to speak. For now, Frank is the typical mob boss. He may be aging, and he’s afraid, but he will never confront it.

#TrueDetectiveSeason2 has certainly improved as it’s reached its halfway point. The exposition is nearly complete and the characters are behaving more like real people. For a murder mystery, however, we have very few leads. By this time last season, we’d heard of Carcosa and the Yellow King, and were on our way to Reggie Ledoux, the first legitimate suspect. Now, all we have is a Raven-masked pellet shooter, and another masked guy who, this episode, lights Ray and Bezzerides’s car on fire. The former never reappears and the latter escapes when Bezzerides can’t cross a highway and Ray’s broken ribs can’t take the chase any longer. There is nothing to cling to so far. There are no interesting leads. There’s hardly even any worthy speculation. Now with its premise in line, True Detective should deliver some more substantial hints about the central plot.

More like this
Mind and Body
6.30.2022 11:00 AM
Male birth control is at our fingertips. Will we ever grasp it?
By Elana Spivack
Mind and Body
6.27.2022 10:30 AM
What’s the best way to wash your face? Dermatologists explain the science of clean skin
By Katie MacBride
Mind and Body
12 hours ago
Weight training: What is the ideal rep range for your goals?
By Sam Reiss
Share: