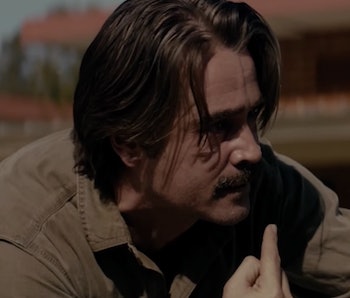 The ponderous new season of True Detective appears to have taken a leaf out of Game of Thrones’ book and pulled a You-Thought-This-Guy-Was-the-Lead-Oh-Look-He’s-Dead-You-Chump. (It’s in the writing handbook right next to The Dark Knight’s You-Thought-This-Girl-Was-The-Love-Interest-Oh-Look-She’s-Dead).

It remains to be seen whether Nic Pizzolatto et al are just feinting to generate an Internet freakout, or whether they (SPOILER?) just shotgun-executed Colin Farrell’s Ray Velcoro for real. But let’s entertain the possibility that they are Jon Snow-ing us and that Ray will be back.

1. According to his IMDB page, our mustachioed friend is in all eight episodes this season. (Whether the mustache will survive until the end remains in doubt, as it unfortunately does not have its own IMDB page. Yet.) The show’s only flashback so far included Ray; there’s nothing to prevent him from surviving only in the past, though it seems unlikely. Points go to: signs of life.

2. Farrell and Rachel McAdams are pretty much all the show has going for it so far this season. He’s the only one who can deliver Pizzolatto’s clunky, self-important dialogue with a conviction even remotely approaching that of Matthew McConaughey in the first season. Killing him instead of Vince Vaughn or Taylor Kitsch would be a baffling choice. It’s not inconceivable; another dark masculinity fable of recent vintage, The Place Beyond the Pines, killed its lead early and handed the reins to less interesting characters. And Pizzolatto has already proven he doesn’t grok why people watch his show, saying they don’t come to see two stars just riding around in a car talking. A tone-deaf director/writer could easily whack his only character worth watching. Points go to: signs of death.

3. We haven’t seen this scene yet and it was in the trailer:

Plus, see this Reddit user’s argument that Ray — incautious, deliberate, uncharacteristically sober — was there to stage his own murder. Points go to: signs of life.

The verdict, tentatively: Ray survived. Even assuming he didn’t know the ambush was coming, and wasn’t wearing a bulletproof vest, he would need a while to bleed out from a gut wound, and could conceivably get help. A Farrell character suffered such a wound in the best performance of his career, in which he also played a character named Ray, and his fate was left ambiguous. Here is a scene from In Bruges just because:

But if he is dead, maybe we only have Game of Thrones to blame: