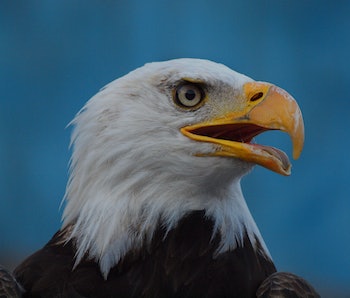 Before he was struck and killed by a car while feasting on a tasty roadkill carcass, Eagle 629-03142 was the oldest wild Bald Eagle in U.S. history. At 38 years-old, this winged patriot was a full 18 years older than the average-aged Bald Eagle. He died a few weeks ago doing exactly what he was raised to do: bring his righteously American species from the brink of extinction.

Born during the summer of 1977 in the majestic trees of northern Minnesota, he hatched during a time when Bald Eagles were in serious trouble on the endangered species list. First dubbed 03142, he joined the pool of only 487 breeding Eagles in the U.S. at the time, whose numbers had been depleted due to the negative effects of the pesticide DDT.

Though outlawed in the early 1970s, the hereditary effects of the killer substance often made Eagle eggshells weak. Hefty mama birds would do their instinctual thing in the nest, but their ten-plus pound weight would stomp all over the would-be hatchlings, killing the little babies inside.

Weeks after his birth, scientists from the New York State Department of Environmental Conservation helped 629-03142 make the move from Minnesota and brought him to a nest in New York’s Montezuma National Wildlife Refuge. Here, with other eaglets, the scientists helped beef up the seriously troubling Eagle numbers in the state. At the time, only one breeding couple was documented in all of New York.

When the male half of the only two remaining Eagles died, 629-03142 was brought in to get it on for his species. And get it on he did. Over the subsequent decades he fathered dozens of Eagles, doing his part to increasing the total number of wild Bald Eagle pairs in the lower 48 states close to 10,000. Let’s stop and salute this brave bird who admirably did the dirty deed for his country over and over and over again.

If you didn’t know about him over your Independence Day weekend, shed a little tear for the memory of Eagle 629-03142. He did America proud.