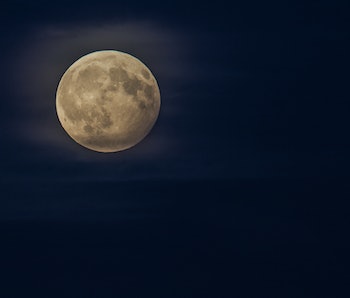 March 31 marked the last time a blue moon will grace the night sky for the rest of the year. If you didn’t get a chance to catch this Easter-themed celestial happening, don’t sweat it, there will technically be another one as early as May 2019.

“Blue moon” is a loaded term. As Inverse previously reported, it doesn’t actually turn blue. Instead, the name has been adopted to describe the second full moon of the month. Stargazers will have to wait until October 31, 2020 to catch two full moons in the same month. But on May 18, 2019 a seasonal blue moon will take place, giving space geeks another shot at catching this lunar pairing.

To make these naming conventions even more confusing, there are actually two types of blue moons. Seasonal blue moons, as opposed to monthly blue moons, are actually quite a bit rarer and occur once every two and a half years. This term also refers to the third full moon in a season with four full moons. Confused yet?

Typically one season will have a total of three full moons. However, because there are roughly 29.5 days between full moons, there are times when a fourth one is able to squeeze its way into the last few days of a season. When that takes place, the third of that lunar quartet is referred to as the seasonal blue moon.

This definition of blue moon is what gave rise to the phrase “once in a blue moon,” since you have to wait a couple of years to spot it hovering in the sky.

Like many other celestial happenings, this lunar event held special meanings for various Native American tribes. It was known as the “Full Flower Moon,” “Full Corn Planting Moon,” and the “Milk Moon.” It was given these names because it occurs during the spring when flours began to bloom, crops were planted, and livestock could start grazing the land again.

So if there’s one thing that rings true, it’s that full moons have been given convoluted names for centuries but that makes them all the cooler.