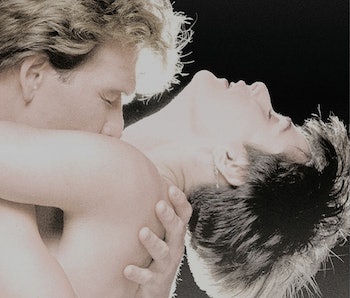 On July 13, Ghost turns 25. The supernatural fantasy stars two attractive leads torn apart by the one hurdle no couple can overcome — death. Except this 1990 gem rewrites the universally-accepted result of a bullet to the gut. See, when Patrick Swayze’s snake-hipped Manhattan banker is shot he sticks around attending to those responsible for his murder. One consequence of losing his corporeality is that he requires a spirit medium to communicate with the living. Enter Whoopi Goldberg in a role that won her an Oscar.

Ghost is a movie that no one who considers themselves a champion of masterclass cinema would ever admit to liking. Those connoisseurs are missing the point. Where else will you find a sequence brimming with tension that involves Whoopi Goldberg visiting a bank manager? Or Whoopi Goldberg fighting with a nun? Or Whoopi Goldberg and Demi Moore in a quasi-lesbian clinch? This is the stuff of comedy gold. And it’s no surprise considering its director is Airplane!’s Jerry Zucker.

Ghost isn’t a piece of ‘90s flimflam that’s “so bad it’s good” — it’s a great movie that dishes out drama, thrills and comedy in equal measure. There’s a reason why this, not Dirty Dancing, Roadhouse or Point Break, would become my guilty pleasure of the Swayze persuasion. Many critics and moviegoers took a less-than-enthusiastic view of the movie. Let’s address the complaints of those naysayers.

“This film is dopily written by Bruce Joel Rubin. (“You lying snake!” is one of his big lines for Swayze.) The zero-perspective direction is by Jerry Zucker, who has been involved with on-purpose-funny movies—such as Airplane!—but none that more richly deserves guffaws than this one.”

The “dopily-written” film won Rubin the Oscar for Best Original Screenplay. And yes, “You lying snake!” isn’t the harshest of movie insults. Why? Because Sam Wheat is too wholesome to dish out an expletive-ridden retort. And there’s plenty of intentionally-scripted humor, so in that case… those guffaws are well-earned.

“What irritates me about the picture is its treatment of Oda Mae, the character Goldberg plays. In herself she’s a strong, personable, feisty woman. But the film insists on making her into a caricature. She’s the only person who’s made to look physically ridiculous, with a crazy-looking outfit she wears during a major part of the movie; and her main function is to act as a servant for Sam, following his orders and speaking his words.”

There’s a brief flirtation with the truth here - yes, Oda Mae Brown is strong, personable and feisty. Those attributes aren’t mutually exclusive to her hideous dress sense. Her insistence on wearing a questionable outfit is part of crafting a three-dimensional character. She drifts into overlapping personality traits - like real people do. Her main function to act as a servant to Sam? He offers her the only chance in her entire disingenuous career as a charlatan to live up to her promise.

“Patrick Swayze as a corporate New York banker? The filmmakers know Swayze’s appeal perfectly well: He has to move, he has to turn dancing into an act of lovemaking and he has to take his shirt off more often than Sigourney Weaver… In all his athletic scenes, Swayze is just fine. It’s the movie’s big cosmic questions that throw him; for these he’s reduced to a look of total stupefaction—not the movie’s finest moments, although they may be some of its most collectible ones.”

Men and women taking their shirts off is nothing new in movies. Pecs sell. Really, this review complements Swayze’s physique and ability to deliver believable action. Looking ‘stupefied’ when faced with circumstances beyond human comprehension? I think he does a damn fine job of looking utterly bewildered by the sight of his own corpse.

“There’s something offensive about the movie’s chintzy view of death and the way it periodically flirts with promising conceits (i.e., Goldberg offering her body as a surrogate so that Swayze and Moore can “touch” one another) only to back away from them in as cowardly a manner as possible.”

The dabble into spirit surrogacy offers a brief moment of respite before the movie’s climax — so, how could this concept have been better showcased? Would the idea of a full sex scene between Molly and Sam-as-Oda Mae somehow have enabled a greater understanding of what was happening? It would have been pointless, anyway. On account of Carl turning up to try and kill everyone.

“A bad movie that a lot of people will like… Though director Jerry Zucker wants his necrophiliac romance to be sensitive, he pumps up its feelings fortissimo so the dimmest viewer will get the point.”

Necrophilia technically involves an unhealthy obsession with corpses, not spirits.

“Swayze and Moore are attractive but mannered and self-involved in a way that works against instilling a sense of mutual loss. “

Sam and Molly’s relationship laughs in the face of an entire generation who hold The Notebook up as a template for romantic ambition. Sure, there’s no dramatic kiss in the rain. Instead we get one better: an erotically-charged scene involving a potter’s wheel.

Ghost is too slow moving at times, and a few of its special effects look incongruously silly, particularly those showing what happens to ghosts not as virtuous as Sam. These days, as movie-making logic seems to dictate, it’s the nice guys who are allowed to stay.”

Those snarling shadows, scraping themselves from the dark recesses of New York’s back alleys, hunting down those souls destined for hell are SILLY? They’re downright terrifying.

Plus, the definition of “movie-making logic” here is muddled with moral consequences; murderers get their comeuppance. That’s how most films demarcate the good guys from the bad guys.

There’s loads of bad reviews for the film on Netflix. The above screenshot is taken from one so awful that it requires a line-by-line deconstruction.

“To begin with, I hate all movies where the romantic male lead is a ghost or angel.”

Oh goodie, this is going to be objective!

“A man shouldn’t have to be supernatural to be loved.”

No, but it helps.

“The romantic scenes were overplayed and the suspense was not believable.”

If there’s no romance then surely there’s no incentive for Sam’s mission to protect Molly? Plus, the entire plot hinges on an unbelievable conceit - a ghost on Earth. Suspend thine disbelief.

“Oh, and by the way, I just couldn’t get the picture out of my mind that when Patrick Swayze occupies the body of Whoopi Goldberg and the movie shows him making love to Demi Moore that it was really Whoopi Goldberg’s body. Disgusting!”

This criticism only holds water if the accepted definition of “making love” has changed to having a smooch and a dance. And also, homophobia.

“If you put Ghost out with the trash, it would make the trash stink.”

Only if the VHS insert was used to wipe.

More like this
Entertainment
Jan. 26, 2023
Talk to Me unleashes a gruesome ghost story on the TikTok generation
By Andy Crump
Entertainment
13 hours ago
Everything We Know About the I Know What You Did Last Summer Sequel So Far
By Eric Francisco
Entertainment
Feb. 7, 2023
Sharper is a Sleek and Seductive Thriller That Keeps You Guessing
By Lex Briscuso
LEARN SOMETHING NEW EVERY DAY.
Related Tags
Share: