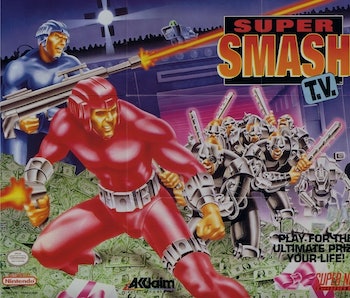 There is a game show on right now, in 2015, that I caught while tuning in for my Wayward Pines recaps. It’s called BOOM!, with an exclamation point, and features contestants defusing a bomb for $500,000. It’s still typical trivia Q&A, but in the form of EOD.

No, it’s not a real bomb, but this is the nightmare that Suzanne Collins wrote in The Hunger Games, or Koushun Takami making Battle Royale. It’s faux-fatal reality game show television. It’s the dark reality that was the end of Shaun of the Dead, and it’s right here in our face.

But over twenty years ago a silly arcade game from Williams and developed by talent that would go on to create Mortal Kombat, spoofed the shit-show television could be in Smash TV. In the distant future of 1999, contestants compete in a hyper-violent gameshow to win color TVs, stereos, or toasters. But if they lose, they die. And the game? Survival.

It’s not as eloquent in its satire of TV as Sidney Lumet’s Network, but it’s a fun excuse to shoot things.

Catered for consoles before eventually making its way to home consoles, Smash TV was made for that quick burst of mayhem while you waited for your dad to get his shoes at the bowling alley. You play as a contestant in this fictional game show shooting down waves of enemies, collecting power-ups and weapons before facing down the boss and advancing to the next room. Each room has different themes, but they’re inconsequential. What matters is the final boss.

Half human. Half robotic tank. All prime-time. Like fusing Bob Barker, de-aging him by four decades then arming him with cannons, the “EVIL MC” is one of the weirdest, unsung final bosses in the annals of gaming.

Of course, there was supposed to be more than just that boss. Teasing a “Pleasure Dome” level, the game was shipped without it because the developers didn’t think players would even get that far. Well, they did, and they were forced to add it in with an entirely re-issue of the game (and this is before downloadable content!). Even in 1990, you couldn’t underestimate the resilience of gamers.

Hot indie games on the market today, like Hotline Miami, can trace their top-down shooter lineage back to games like Smash TV though it wasn’t particularly innovative. It was an arcade game through and through, with the most typical functions of a game in full force: Levels, power-ups, final bosses. It’s all here.

But what keeps Smash TV from being a forgotten relic was its premise. Hyper violent television. From Network to Nightcrawler to actual game shows like Survivor and BOOM!, it’s curious how belittled Smash TV treated its own premise. Not that anyone actually has to survive in Survivor nor will anyone be disembodied in BOOM!, but our attraction to edgy violence seems only hindered by basic human decency. Just how far away are we from what Smash TV imagined?