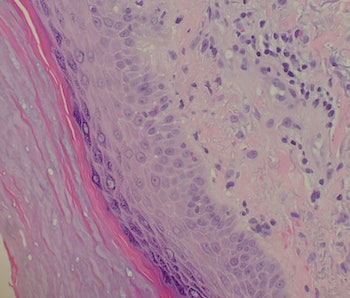 For a seemingly simple fact, the number of organs in the human body is surprisingly controversial. Though the human body hasn’t changed much since modern humans emerged, our total number of organs — or what we call organs — has. A couple of years ago, the number was 78. At the end of 2016, doctors nudged the number up to 79. On Tuesday, scientists announced they’d found the 80th: a network of fluid-transporting vessels that span the entire body called the interstitium. But it has left some people familiar with human anatomy scratching their heads. The interstitium is nothing new.

In a paper published Tuesday in the journal Scientific Reports, doctors propose that the interstitium is the biggest organ in the human body by volume. It’s described as a fluid-filled space, supported by a lattice of collagen fibers, that runs throughout the human body, both within other organs and between them. They don’t call the interstitium an “organ” in the paper, but they’ve referred to it as an organ in interviews with the press, causing some confusion.

At first glance, it seems like they’re just talking about connective tissue, which has long been characterized as the broad class of tissues that support other tissues and organs (some specialized connective tissues are bones, blood, and fat).

What’s new in this study is that the authors are arguing that a specific type of connective tissue is connected within a greater network — the interstitium. This organ, the authors say, may form a protective layer around other organs. Which, admittedly, is huge, if true.

Here’s the summary they provide in their abstract: “In sum, we describe the anatomy and histology of a previously unrecognized, though widespread, macroscopic, fluid-filled space within and between tissues, a novel expansion and specification of the concept of the human interstitium.”

The obvious question is why it took doctors so long to identify the interstitium in the way they just did, and the answer is simple: They just weren’t looking at it right. Previous researchers mischaracterized the connective tissue, the study’s authors say, because once it’s removed from the body for examination, all the fluid flows out, leaving something that looks merely like solid layers of membranes rather than the fluid-filled pockets and channels befitting an organ.

Though some doctors had recently noticed the reticular (that is, net-like) pattern of the interstitium, no one had successfully found a way to sample it. To get past this obstacle, the researchers devised a way to examine bile duct tissue samples obtained during surgeries without losing the structure of the fluid-filled channels. Removing the tissue, they rapidly froze it to retain the reticular structure of collagen fibers and fluid-filled chambers, which are described in the paper.

Their examination revealed that the tissues “are compressible and distensible and may thus serve as shock absorbers.” Furthermore, the channels connect to the lymphatic system, a central part of the human immune system, suggesting it could play a role in immune function. Since it’s a fluid-filled network, it may even function as a highway for cancer cells to travel through the body — a useful map for doctors wanting to understand how cancers metastasize and how to prevent it.

At the moment, though, the implications of this study are far from settled. The truth is that it will require a lot more research to understand what the role of the organ — if it is an organ at all — in the human body is. As The Daily Beast reported, the researchers had the paper rejected more than half a dozen times before Scientific Reports accepted it, so it’s clear that this discovery is a controversial one in the scientific community. That being said, the journal it found a home in is not a fringey rag. As with any medical discovery, time will tell us whether it actually is a discovery.

Abstract: Confocal laser endomicroscopy (pCLE) provides real-time histologic imaging of human tissues at a depth of 60–70 μm during endoscopy. pCLE of the extrahepatic bile duct after fluorescein injection demonstrated a reticular pattern within fluorescein-filled sinuses that had no known anatomical correlate. Freezing biopsy tissue before fixation preserved the anatomy of this structure, demonstrating that it is part of the submucosa and a previously unappreciated fluid-filled interstitial space, draining to lymph nodes and supported by a complex network of thick collagen bundles. These bundles are intermittently lined on one side by fibroblast-like cells that stain with endothelial markers and vimentin, although there is a highly unusual and extensive unlined interface between the matrix proteins of the bundles and the surrounding fluid. We observed similar structures in numerous tissues that are subject to intermittent or rhythmic compression, including the submucosae of the entire gastrointestinal tract and urinary bladder, the dermis, the peri-bronchial and peri-arterial soft tissues, and fascia. These anatomic structures may be important in cancer metastasis, edema, fibrosis, and mechanical functioning of many or all tissues and organs. In sum, we describe the anatomy and histology of a previously unrecognized, though widespread, macroscopic, fluid-filled space within and between tissues, a novel expansion and specification of the concept of the human interstitium.

More like this
Science
6.26.2022 11:00 PM
The powerhouse of the cell has a more complicated origin than we thought
By Viviane Callier and Knowable Magazine
Science
6.28.2022 10:00 AM
How are drugs absorbed in the body? The science of medicine, explained
By Tom Anchordoquy and The Conversation
Science
6.27.2022 11:00 AM
Letting your cat go outside could spread “life-threatening” parasites — new research
By Amy Wilson, Scott Wilson and The Conversation
Related Tags
Share: