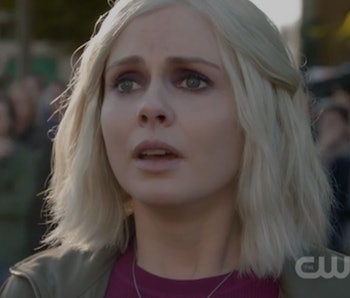 The CW drama iZombie came into Season 4 with a whole new Seattle. Literally. New Seattle is the name of the walled-off city where zombies freely roam, which became necessary after the world lived the undead actually existed. In spite of the new circumstances not much has changed for the lead and the show has been slow to really shake things up. That was until Monday night’s episode where one death finally got the story moving.

On Monday’s episode, “Goon Stuck,” Liv goes on violent Canadian hockey brain while investigating an incident that results in the deaths of three zombies and a human. Meanwhile, Major is outside of New Seattle with Blaine’s No. 2, Don E, on a mission to ensure their city’s future and Chase struggles with what to do with human smuggler Renegade, also known as Mama Leone.

While the crime Liv and Clive were investigating put them at odds with Chase, it is his choice to go forward with the public execution of Renegade essentially makes them enemies. Live, furious at both Chase and Major for the shocking action, decides to take over Renegade’s human smuggling operation. It’s the reason Mama Leone was killed, but Liv seems very committed to this new path in the closing moments of the episode.

iZombie has slowly dissolved the relationship between Liv and Major this season, but this latest development could break their bond. Major siding with Chase never sat well with Clive or Liv, but it was not a problem until Major got upset that Liv helped Mama Leone. Personally, Liv was pissed that Major stood by as the good solider while she was killed, but professional Liv’s new undertaking makes her Major’s problem as a member of Filmore-Graves. Whether they aim to mend their personal relationship, iZombie has officially made them enemies for the time being. It’s complicated and messy, which is something The CW drama has done well in the past.

The procedural element may not be going away, but Liv becoming Renegade could bring the secrecy back into iZombie. When the series began Liv was hiding that she was a zombie from Clive, who thought she was a psychic, and here’s another secret she’ll have to keep. During “Good Stuck” Clive did not want to hear about Liv’s dealings with Mama Leone, so he certainly won’t want to hear about Liv taking over. This could add some of the tension from the beginning of the series back into the mix.

Most importantly, this new development adds some excitement to Season 4. iZombie is usually fun and always has distinct energy, but now we have some urgency. Personal stakes are included and that reenergizes the series. There’s been the threat of the American government dropping bombs on New Seattle, but that would end the show, so it has resulted in a storyline that lacked powerful impact. Now, there’s a real threat in Liv taking the job of someone who was just killed and potentially hiding it from some of the people she’s closest to.

The ending of “Goon Stuck” delivers and, for the first time this season, the anticipation for next week’s episode is high.

iZombie airs on Mondays at 9 p.m. Eastern on The CW.