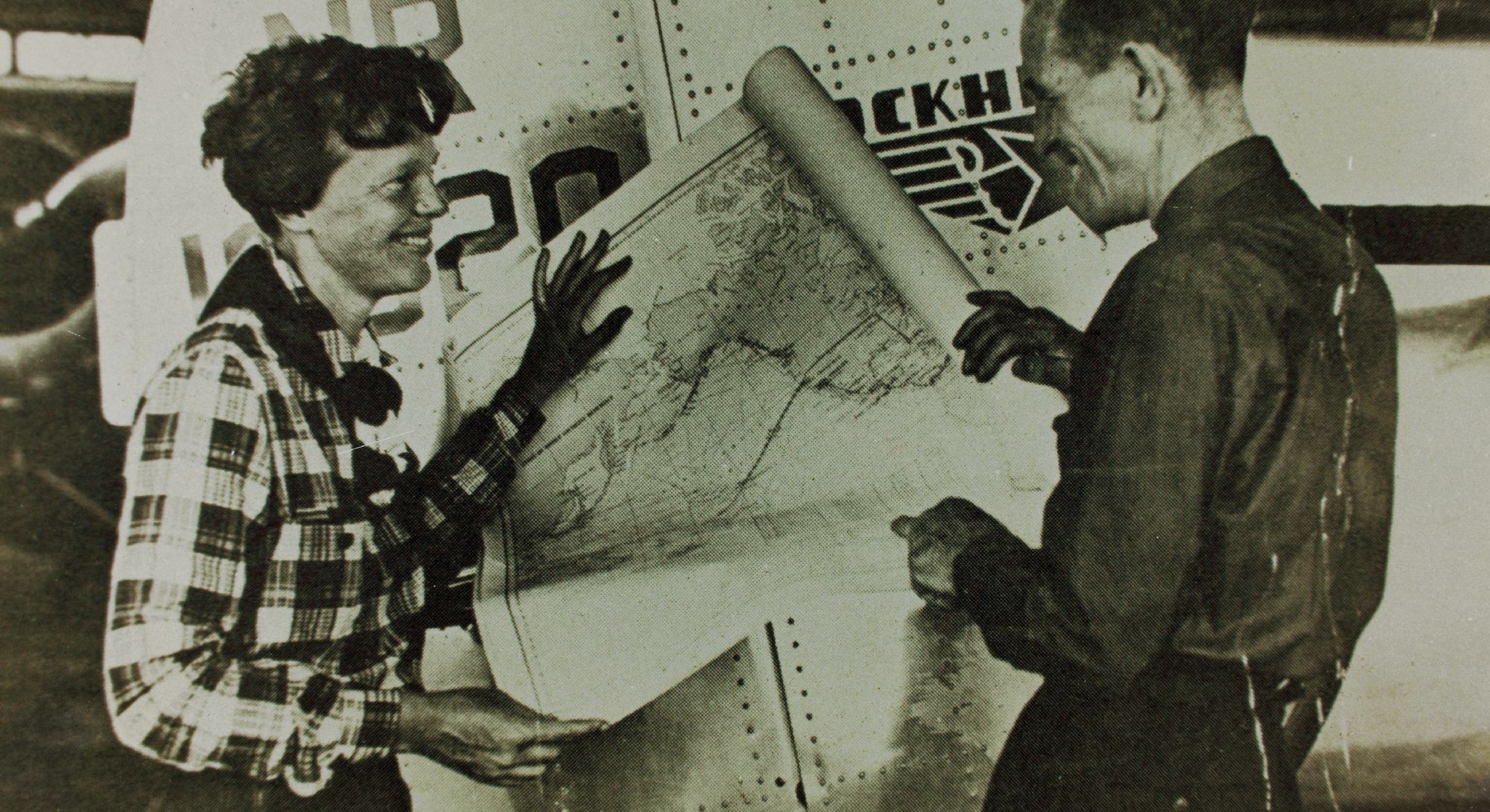 Amelia Earhart and navigator Fred Noonan set out to fly around the globe in 1937 but mysteriously lost radio contact over the Pacific Ocean, and nobody ever heard from them again. Eighty years after their disappearance, people are still deliberating over the scant remains of their journey in hopes of solving the mystery.

A set of bones, discovered in 1940 on Nikumaroro Island in the remote western Pacific, is the most compelling evidence for the adventurers’ final resting place, but there’s a problem: those bones no longer exist, having disappeared just like Earhart and Noonan. But that’s a small detail for people bent on finding the aviators’ graves. Scientists continue to squeeze every bit of analysis from what we know about the bones, which were dismissed as a stranger’s when they were first found.

Richard Jantz, Ph.D., professor emeritus of forensic anthropology at the University of Tennessee Knoxville, argues that the set of bones found on Nikumaroro Island “more likely than not” belonged to Earhart. He used old measurements and new extrapolations from historical data to make his case in a study published in March in Forensic Anthropology. Earhart and Noonan landed on Nikumaroro – or swam there – and then died as castaways, Jantz says.

“I do not regard the case as closed, but I do think that the Nikumaroro hypothesis has stronger support than any other hypothesis,” Jantz tells Inverse.

Not everyone is convinced, though.

“This really doesn’t tell us much,” Angelique Corthals, Ph.D., an assistant professor of forensic anthropology at John Jay College of Criminal Justice, tells Inverse. Corthals, who has followed the Earhart case for years, seems fatigued by another re-analysis of the same old bones.

“The last piece of news that we had on this did not add much. The bottom line of this is that if you don’t have a body, you don’t have definitive proof,” she says.

She has a point: What can be proved from bones that no longer exist?

The bones, parts of human arms and legs, have not been seen for a long time. They were first discovered in 1940, by workers at a British settlement on Nikumaroro (then known as Gardner Island). They had actually first discovered a human skull, which they buried in haste; when their supervisor found out, they were forced to do a thorough search, which turned up the infamous bones.

The crew sent the bones to Dr. D.W. Hoodless, principal of the Central Medical School at Fiji. At the time, Earhart’s disappearance was still fresh, and Gardner Island was only a couple hundred miles south of Howland Island, Earhart’s intended destination, so it seemed possible that Earhart and Noonan could have been blown off-course and landed there, leaving their bones behind.

Hoodless quickly dismissed the bones as belonging to a man that was five-foot-five. Since Noonan was over six feet tall, Hoodless ruled him out too. The case was closed, and after that, the bones disappeared. It’s not clear whether they’ve been destroyed or simply lost, but whatever the case may be, they’re not in a forensics lab.

The last correspondence regarding the whereabouts of the bones came from Hoodless himself, in a report surfaced in the Western Pacific High Commission’s archives in London by members of TIGHAR, an international group best known for its investigations into the Earhart mystery. In the report, Hoodless, anticipating criticism of his analysis, says: ‘if such a detailed report is required the obvious course to adopt would be to submit these bones to the Anthropological Dept of the Sydney University where Professor Elkin would be only too pleased to make a further report.” But, as anthropologist Karen Burns, Ph.D., pointed out in her study on Nikumaroro in 1998, there’s no record of the bones ever arriving at the University of Sydney. After that, the bones’ paper trail ends.

Nevertheless, Jantz based his analysis on Hoodless’s hotly contested set of measurements, arguing, like Burns, that the original assessment was wrong and that the measurements were indeed consistent with Earhart’s stature. In his paper, Jantz argues that Hoodless based his sex assessment on characteristics of the femur that modern forensic anthropologists know don’t actually differ between the sexes. Based on that, it’s impossible to verify the bones belonged to a man, he argues.

What is possible, Jantz says, is confirming the bones’ identity by determining whether their dimensions match those of Earhart or Noonan.

It’s not clear whether the Nikamuroro bones ever made it to the University of Sydney from Fiji.

That the bones have disappeared means they can no longer be considered sound evidence. Extrapolation, after all, is only so reliable.

“I’m okay with the conclusion that these are the bones of a woman who seemed to have the same stature as Amelia Earhart,” Corthals says. “Does it prove that it’s her? No, it does not. Especially when you’re looking at long bones, and especially when the bones are not there.”

In addition, she’s skeptical about FORDISC and even more so about the data that was collected by both Hoodless and Jantz and plugged into the program in the first place.

“When you measure bones, there’s a huge amount of subjectivity that goes into it,” says Corthals. A difference of just 1 or 2 millimeters, she explains, can make a “huge difference” in FORDISC, causing it to “classify the bones as a different thing.”

Jantz maintains that the measurements he’s made from the oil can photo and the trousers are the first “good estimates” of Earhart’s absolute dimensions. “It shows that Amelia Earhart’s bones and the Nikumaroro bones are very similar, and that such similarity is unlikely if the Nikumaroro bones are someone else,” he says, noting that his findings are published in a peer-reviewed academic journal (albeit a low-impact one, Corthals points out) and not simply on a blog, like the other Earhart theorists.

“These are things we did not already know,” he says.

Jantz and Jeff Glickman of Photek used a photo of Earhart holding an oil can to estimate her height and the length of her arm segments, because her limb lengths were never recorded. By doing this, Jantz found that there’s a high degree of certainty that the radius (lower arm bone) found on Nikumaroro was very close in length to Earhart’s.

Discovering Earhart’s actual height required a similar work-around. Though her pilot license said she was five foot eight, her driver’s license said she an inch shorter, and since these are self-reported anyway (who remembers ever being measured at the DMV?), Jantz says we can’t trust them. So, with help from historic clothing seamstress Paula Guernsey, who measured the inseam of a pair of Earhart’s pants held in a collection at Purdue University, he estimated the length of her tibia, her lower leg bone.

Jantz plugged the newfound data into a software called FORDISC, which determines the likelihood that an anatomical dimension belongs to someone of a particular sex, ancestry, or origin. It determined that there’s 99 percent chance that the bones found on Nikumaroro belong to Earhart and not someone else. Since the likelihood that some other person of Earhart’s height and build died on that island is so low, Jantz confidently makes his conclusion: It is reasonable to say that the bones probably belonged to Earhart.

Jantz and Corthals may never agree, but then again, nobody involved in the Earhart mystery ever does. As recently as 2015, a paper published in 2015 by Pamela Cross and Richard Wright, Ph.D. argued that Hoodless’s assessment of the Nikumaroro bones was correct. There are bound to be many more disagreements like this in the future.

As the past 80 years have shown, America remains curious about what happened to Amelia Earhart. You need only look to the baseless conspiracies contained in historical aircraft message boards or the r/UnresolvedMysteries subreddit for proof: there, you’ll find theories that Earhart survived and lived the rest of her life in New Jersey under the name Irene Bolam; that President Franklin D. Roosevelt knew Earhart was executed by the Japanese, who thought she was a spy; or that she did in fact crash-land on Nikumaroro, only to be eaten alive by giant coconut crabs. Even the flashy headlines following the release of Jantz’ study, suggesting the case is closed, show that Earhart’s story will outlive the facts.

Jantz and Corthals agree that scientific analysis is the only way to unravel this mystery rationally. But there’s no science without data, and ultimately even Jantz must admit that, without the actual bones, we may simply never know for sure whether Earhart and Noonan died on Nikumaroro.

“My hope is that what I do will show the power of data in addressing the question and that data should trump ideology,” says Jantz, who is open to other hypotheses as long as evidence is put forth to support them. “I agree that there may never be full closure in the sense of a positive identification, unless the bones somehow surface.”

Corthals remains aloof. “They could have swum to the island. But I have no idea,” she says of the Nikumaroro hypothesis. “This is as good as any other. I’m a forensic anthropologist, and we work on bodies, not on phantoms.”