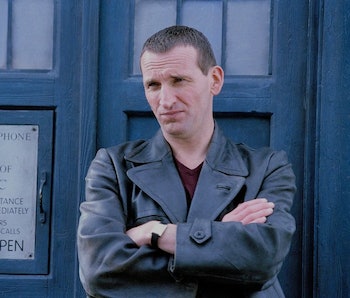 Actor Christopher Eccleston has a long-running and deeply troubled relationship with Doctor Who, the time-traveling British program he helped revive in 2005. Somewhat famously, he refused to return to the role in the famed 2013 50th Anniversary Special Day of the Doctor. But now, former Who showrunner Steven Moffat has released the script her originally wrote that includes the 9th Doctor, and it just might be the greatest thing we’ll never see.

On Thursday, Radio Times noted that Moffat published a piece of the 50th-anniversary script as part of A Second Target For Tommy, which is a book meant to help support author Tommy Danvaband in his fight against cancer.

Roughly speaking, the original draft didn’t include the War Doctor. (Anecdotally, the role was created when Eccleston refused to return.) “The Moment is clearly not Rose Tyler in this draft,” Moffat writes in the introduction, “and the barn itself has a different, erm, origin. If barns can be said to have origins.”

In an excerpt from a scene, Christopher Eccleston would have played a version of his 9th Doctor during the Time War, and just like the War Doctor, he would have been in a barn conversing with a manifestation of Rose Tyler called “Raggedy Girl” as she sat on a weapon called “The Moment.”

But the dialogue would have looked quite different:

9th Doctor: Don’t sit on that.

Raggedy Girl: Why not?

He strides over to her, grabs her arm.

9th Doctor: Because it’s not a chair, love — it’s the most dangerous weapon in the universe.

The rest of the scene includes plenty of callbacks and Easter egg sort of references specifically related to Eccleston’s version of the character, like his “funny face” and big ears.

Instead of using Eccleston in the story he originally intended, Moffat instead introduced John Hurt’s War Doctor, a forgotten incarnation of the character that fits in between Paul McGann’s 8th Doctor and Eccleston’s 9th. So the War Doctor teamed-up with David Tennant’s 10th and Matt Smith’s 11th.

Moffat is fond of pulling this kind of stunt for versions of Doctor Who that might’ve been. The 12th Doctor and Clara Oswald reunion that he wrote for the 2017 Christmas Special originally looked quite different, and Moffat revealed the original script in January, which would probably have inspired many more tears.

If you want to support a good cause, and read the full script, you’ll have to buy a copy of A Second Target for Tommy right here.