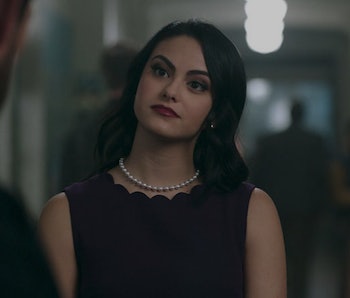 Veronica Lodge came to Riverdale from New York City planning to change her life. The new girl in town was hoping to leave her bad girl persona behind to become a good friend and loyal daughter who stands by her father. Those two things contradict one another, however, because Hiram Lodge is a manipulative criminal. Veronica may view herself as a good person, but the question still stands: Is Veronica Lodge the villain on Riverdale?

When the second season began and her father returned, Veronica went from high school student to crime boss-in-training. After pushing her way into the Lodge family business, she became an active participant in their mysterious plans. She may view the moves she’s made to further their goals as better than what her parents would do, but the series of bad deeds make Veronica a bad guy. Ends don’t justify the means, and all that noise.

With the Lodges plan for a for-profit prison in Riverdale revealed, the eyes of the town are on Veronica during Wednesday’s Episode, “Primary Colors.” Veronica runs into resistance from her fellow students who are pissed about her parents’ plan. When her mom asks her to lay low Veronica decides to run for Class President in her typical bold fashion. Meanwhile, Archie is stuck between his parents and Veronica’s when Fred wants of their business dealings.

Each time Veronica positioned her actions as better than two evils, she was doing something bad. For instance, when she forced Major McCoy out of office before her parents leaked the Mayor’s affair with Sheriff Keller. It was cruel to turns the screws to the town’s Mayor. All that was missing is a smirk to the camera as she walked out of the office. Archie called his girlfriend out for guiding him to get his dad to run for Mayor. Veronica has spent quite some time this season manipulating people, Josie and Archie for example, to help her parents. These bad deeds are turning into items for the resume she uses to apply for town villain.

In fact, it’s Veronica’s belief in herself that could make these acts worse. She dates Archie and is Betty’s best friend. While Hermione laid the groundwork and Hiram put the plan in motion, Veronica was making herself part of Riverdale as a staple at the high school. Smiling in people’s faces while plotting against the entire town makes you a crueler villain than Hiram’s brand of evil.

Veronica could be the villain of Season 2 because she’s in position to have the biggest emotional impact. Her choices could put a knife in the back of the show’s most beloved central characters.

Riverdale airs on Wednesdays at 8 p.m. Eastern on The CW.