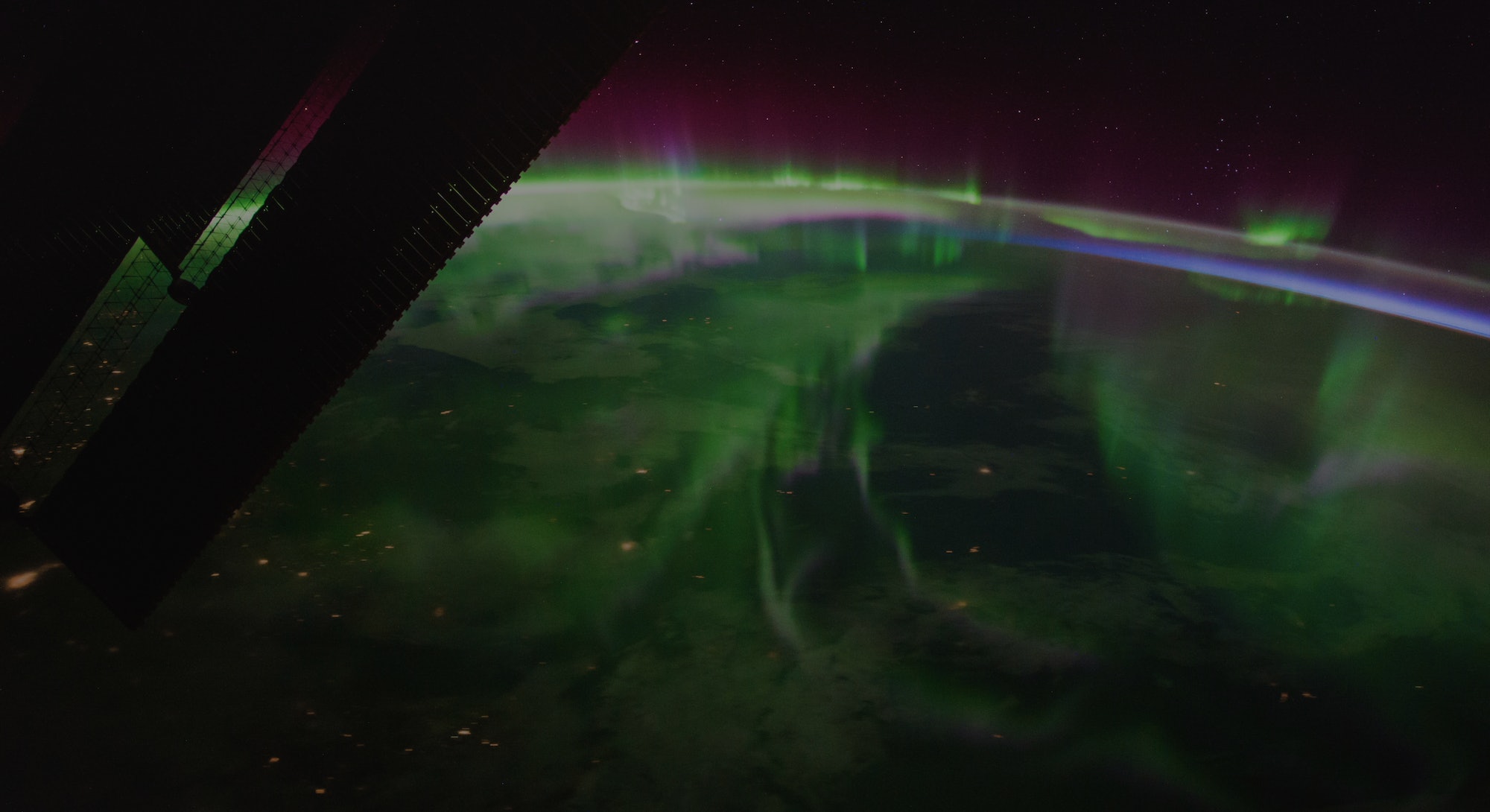 Only 533 people have ever seen the entire planet Earth from space, and that profound experience has changed them. They no longer see “home” as Ohio or Russia, but all of the world below them. This view imparts an almost spiritual, unifying view of the whole planet. It’s called “the Overview Effect,” and it might be one of the most powerful, life-changing experiences a person can have.

A new documentary series wants to recreate that feeling using television. But, is that even possible?

One Strange Rock, a mammoth 10-part series from National Geographic, is pulling out all the stops to show viewers the planet in a unique way. For a show about the Earth, it’s certainly star-studded. Darren Aronofsky (Mother!) is the executive producer, and Will Smith, who once famously proclaimed “welcome to Earth,” appears as the (perhaps unnecessary) host. The real draw is the eight astronauts who actually have seen that all-encompassing view of the world. Over the course of the series, astronauts like Nicole Stott, Mae Jemison, and David Bowie-enthusiast Chris Hadfield look back at the time they spent looking back at Earth, all while some of the most breathtaking nature cinematography illustrates the remarkable history of our world.

“I really think our planet is a paradise,” Mike Massimino, who spent nearly 24 days in space over the course of two missions to repair the Hubble telescope, tells Inverse at a press event ahead of the red carpet. “I didn’t have that feeling before. I thought that this is a wonderful place to be, but seeing it from space, and the beauty of it, this was my feeling: This is what heaven must look like.”

The Overview Effect, this massive cognitive shift that was first codified in the late Eighties by space writer Frank White, hits different astronauts in remarkably distinct ways. Almost everyone who sees Earth from space can’t help but marvel at its singular beauty and fragility, and some astronauts liken it almost to a religious experience. National borders and human conflicts all just seem so petty in the wake of this new, profound connection with the planet.

“It’s like looking at the Sistine Chapel,” Massimino continues. “You see lots of pictures and VR, but you’re there, and all of the sudden it hits you.”

Now, you can visit the Sistine Chapel without too much effort, so you don’t have to just rely on pictures. But space? Unless you’re an astronaut, pictures of Earth from above are all we have, and One Strange Rock does its best to emulate that feeling.

The series tries to recreate this zoomed-out feeling, somewhat paradoxically, by zooming in to tell tales about just how miraculous Earth is. Each episode focuses on a theme and puts a spotlight on one astronaut in particular, though the other seven make appearances. The premiere, featuring Hadfield, is about oxygen. Breathtaking photography takes viewers to a salty desert in East Africa and follows a dust storm that blows tons of sand across the Atlantic Ocean before raining down on the Amazon. That sand fertilizes the jungle, but far from being “the lungs of the Earth,” the Amazon’s wildlife use up every last breath the lush foliage generates. A lot of the air we’re breathing, Hadfield explains, comes from countless numbers of microscopic algae known as diatoms, which feast on the minerals created by erosion from Amazon rains. And, to bring it all full circle, that African desert our journey started in was once a seabed, and the sand is, in part, generations of diatom corpses that sank to the bottom ages ago.

From up in orbit, Chris Hadfield couldn’t see the smallest parts of this complex system (though there are enough diadoms that when they bloom en masse they turn parts of the ocean a different color from space). But, by going in a little deeper, One Strange Rock aims to explain how amazingly connected the planet is on every level. It’s showing and telling.

“We, from the very beginning had this idea that this was both a cerebral and an emotional experience,” Jane Root, the acclaimed documentarian who produced the series alongside Aronofsky, tells Inverse.

Doing this wasn’t easy. Root recalls one specific shot they wanted, an extreme close up of individual oxygen bubbles emerging from the tiniest algae. Even with advanced microphotography techniques, the bubbles were moving too quick to capture. To get around this, the team had snails crawl over the algae-laden rocks, and the slimy trail they left behind slowed down the bubbles by just enough that they could get the shot.

“The biggest thing about the overview effect is perspective,” Ari Handel, Aronofsky’s production partner, explains. “So, what tools do we have to give new perspective to the person sitting on the couch? Camera work, locations, but it’s also the lenses and the sciences we use to look at these things. To show people something that might be as familiar as a piece of moss or a piece of algae, but with a new light and a new appreciation. That’s a perspective shift. If we can give those perspective shifts, we can tell that story.”

One Strange Rock’s focus — that it really is one, singularly united and connected rock — comes across in more ways than just the places the show takes viewers. “There’s a tendency in documentary filmmaking for filmmakers to go out and make different things,” Root says. “Here we wanted to really make it feel like something that was really cohesive.”

Planet Earth for example, weaves a masterful narrative about an individual habitat, making protagonists of its animal subjects, but when an episode moves away from wild dogs on the Serengeti to snow leopards in the Himalayas, there isn’t as much of a sense of connection between the two compared to One Strange Rock’s holistic approach. It also looks different, because documentaries like this are made by massive teams, and different directors with different eyes shoot in different locations. One Strange Rock is no different, as its 139 shoots across six continents were certainly not done by the same team. That’s where Aronofsky comes in.

“A really nice thing about this collaboration with Darren Aronofsky is that we’ve had quite strict rules,” Alice Jones, who directed the tenth episode of the series, tells Inverse at another press event. Aronofsky, whose sense of style shows in movies like The Wrestler and Black Swan, gives the footage a sense of cohesion, as he pushed for all the various filming teams to employ top-down drone photography and spiraling visual motifs that make all the footage feel whole. He even Skyped with ESA astronaut Paolo Nespoli, who filmed astronaut Peggy Whitson about the International Space Station, and gave him some cinematic guidance.

“That’s always been our goal, is to bring stories to science, and to try to figure out ways to connect to people in an emotional way,” Aronofsky tells Inverse. “Luckily we had these incredible emotional stories from these astronauts, who all went through a spiritual transformation by seeing the Earth from above. And, we used our skills to figure out how to further dramatize that.”

This is all well and good, but ultimately, One Strange Rock is a TV show. Can it come close to emulating the rare experience of actually seeing Earth from space? Curiously, for a sweeping nature documentary, One Strange Rock doesn’t end with a conservationist call to arms, and Aronofsky notes that the words “climate change” aren’t even uttered. All One Strange Rock wants to do is to get people to see their world from a slightly different perspective, hoping the new view will foster a new appreciation. What happens after the credits roll isn’t their concern.

One Strange Rock is a moving documentary, but is it “seeing Earth from space” moving? Perhaps then it’s best to ask the astronauts, the people who actually felt the Overview Effect, if One Strange Rock gives them even a fraction of that.

“I think it does, and more, actually,” Nicole Stott tells Inverse. “I was learning things and associating it with the experience I had and saying ‘oh my gosh, that explains it even more. That connects me even more.’ Awe and wonder are two words that come up a lot when you think about looking at Earth from space, but I felt that every minute I was watching.”

Mike Massimino, who described Earth from space as “a paradise,” isn’t quite as sure anything can truly convey that feeling. “It’s near impossible, because it’s so compelling and so beautiful, and we only have words generally to communicate with,” he says, before praising One Strange Rock’s cinematography and narrative — up to a point.

“The footage now, the cameras are getting better and better, and the footage in this show [especially]. But, being there and being part of that experience, I think everybody’s got to get to space,” Massimino says.

Massimino’s probably right, though I’ll have to take his word for it, since I’ve never been to space. And, if I can’t watch the Earth from 240 miles up above through the window of the ISS, a gorgeous TV show will have to do.

One Strange Rock premieres on March 26 at 10 p.m. Eastern.