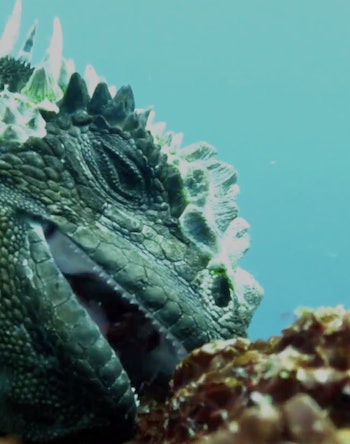 The horny sloth in the first episode of Planet Earth II desperately attempts to prove himself worthy of a mate and still comes across as more secure than the documentarians following him through the mangroves. From the epic Hans Zimmer score to nearly pornographic animal-action money shots, to David Attenborough’s Oz-like appearance in a hot-air balloon, the latest BBC blockbuster mini-series is absolutely bent on highlighting a human achievement (its production) as a wonder of the natural world. “We can now show life on our planet in entirely new ways and bring you closer to animals than ever before,” Attenborough intones. Sure, he remains a circumspect, homey figure, but this is his version of a rap boast. All those other nature documentarians, he gently implies, are pretenders. He’s got drones on drones. He’s laser-activated remote cameras. His boys have wingsuits.

The spectacle of Planet Earth overwhelms the science it contains and, yes, that’s by design.

Planet Earth II is for people who appreciate nature, but not for nature lovers. The distinction isn’t semantic. By transforming a nature documentary into a practical effects-driven novelty, the makers of the documentary have effectively created a new genre: binge-worthy slow TV. The series is ostensibly about lions being kicked in the face by giraffes and komodo dragons fighting, but, in fact, it’s really about footage of those things. Planet Earth II doesn’t make you think; it makes you watch.

For most viewers, the answer will be, “Nah.” (For what it’s worth, the right answer is “Fernandina Island.”)

Because the beautiful swimming scenes are so arresting, information retention feels like a secondary or tertiary goal for an audience that has been primed to actively participate in the awe-striking. There are more than twice as many characters introduced in “Islands” than in most pilot episodes of scripted TV dramas: sloths on the island of Escudo, komodo dragons, the Chinstrap penguins of Zavodovski Island. But with all the different animal subjects doing various different animal things, it’s hard to recall what happened on any given episode. This is the universe and the Marvel Universe. The experience of watching is undeniably beautiful, but it’s ultimately a repackaging of nature for a majority urban audience. The sort of college-educated, well-to-do people who go on the vacations advertised against the show on BBC America, live predominantly in cities now and may — the producers seem to have posited — want to mainline the outdoors.

In the second episode, “Mountains,” Attenborough says the “details” of the lives of snow leopards have remained a fuzzy, “but now, at last, helped by the latest remote camera technology, we’re getting closer to them than ever before.” What is the tease here? Is the audience supposed to get up for the personal lives of snow leopards or prepare to geek out on the tech, and the mystery of how it worked? Given the emphasis on remote imaging that continues through to the end of the episode, it’s hard to not conclude that this whole thing is about nifty cameras.

And, though nifty cameras are indeed cool, that sucks. Viewers can’t trust what they’re watching. Yes, we can believe this snow leopard is real and this camera footage is real, but Attenborough’s claim about the significance of the technology is hard to believe. Experts knew about mating rituals. It’s not like a drone followed a cat home to a Himalayan A-frame and caught it Facebook-stalking a lynx. High definition doesn’t mean new facts. Implying otherwise is like suggesting that paparazzi have a unique insight into Jennifer Lawrence’s internal life. They don’t. They just have pics.

People looking for informative nature documentaries shouldn’t be exclusively swayed by aesthetics. What we demand of non-fiction should be soberer than what we expect from fiction. Nature documentaries made to resemble “real” versions of Jurassic Park distort our perception of the subjects. Despite what Planet Earth II shows us, Sloths are not constantly in a state of sexual need, but after watching Planet Earth II, that ends up being our biggest takeaway. We don’t get a rounded picture of these animals, but instead, a one-sided sensationalist representation of what nature is. Should Planet Earth II give us a few more shots of napping snow leopards or sloths when they’re not in heat? Probably. Because without that slower counter-balance, the atheistic focus makes the facts start to feel like fiction. And since the style makes it so the facts are so difficult to retain, the result is the same: Planet Earth II becomes a nature documentary that doesn’t educate.

And yet, the stories about how these human film crews captured the footage are already circulating on the web, and they’re becoming more popular than the facts about the animals themselves. It feels like most audience members are more likely to repeat those cameraman stories to their friends than the stories about the animals. The real stars of Planet Earth II aren’t the animals, or even the magical David Attenborough, who remains a charming ringmaster. The cameras are the stars of the show, which begs the question: If a sloth searches for its mate and camera drones aren’t there to record it, does he still make a weird barking sound?

Yes. He does. The whole point of nature documentaries is to remind people that this stuff happens in their absence, that nature is not a consumer good. But by focussing on the documentation rather than the nature, Planet Earth II puts spectacle at the core of ecology and technology ahead of truth. It’s beautiful — and that’s not a compliment.