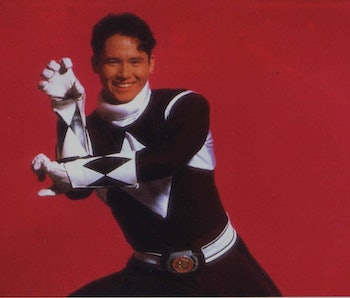 Adam didn’t have a square jaw or rock-hard abs, nor was he arrogant or cocky. He was honest, courageous, and loyal. He possessed the patience of a monk and the confidence of a warrior. He was also a leader in Angel Grove’s community, volunteering to mentor young kids in numerous episodes. He was a socially responsible superhero rendered relatable.

And he was Asian. Johnny Yong Bosch was (and presumably still is) half-Korean, half-Irish/German, but possessed distinct features that made him “the Asian guy.” He was also handsome, a trait not typically acknowledged in Asian men. The show’s producers acknowledged Bosch’s attractiveness by frequently making women fall for him. It became a running joke.

Previous representations of Asian men had been embarrassing for Asian viewers and, hopefully, the actors taking the roles. Mickey Rooney’s performance in Breakfast at Tiffany’s was mind-boggling racist and Long Duk Dong in Sixteen Candles is a damn joke. But then, here was Adam. He was Asian, like me, but he was kicking ass! And he got the girl!

Problematic as the concept of “getting the girl” may be, it made Asian boys like myself feel capable and desirable. Adam simultaneously defied stereotypes while owning them. Yeah, he knew martial arts, but due to Bosch’s legit cred as a real expert, Adam made that awesome. While the other Rangers (except for Rocky, Jason, and Tommy) knew karate in the most pedantic way, Adam was doing wushu, jeet kune do, and shaolin-style kung-fu. Adam didn’t just prove Asian men can be different, he also made us proud to be who we were.

Mention Power Rangers to people and you’ll inevitably hear from those who hadn’t thought about it since 1995 about the questionable casting of black and Asian actors to portray its Black and Yellow Rangers. The show course-corrected when that portion of its cast departed for greener pastures, bringing in Johnny Yong Bosch, Steve Cardenas, and Karan Ashley as the new Black, Red, and Yellow Rangers respectively.

“It wasn’t intentional at all. At that time, Haim and I were new to this country,” said producer Shuki Levi in an interview with Complex a few months ago. “We didn’t grow up in the same environment that exists in America with regards to skin color.”

But people dwell on negatives. They forget what mattered: They included teenagers of color to be superheroes. Marvel isn’t going to have Black Panther until 2018, and there are zero indications that its other minority superheroes will be gracing the big screen.

Power Rangers did it twenty years ago. Even today there are significantly few Asian superheroes in pop culture. We hold on to all of them — Kato, Silk, Jubilee, Atom (Ryan Choi) — because they’re all we’ve got. But we musn’t forget: we have the Black Ranger. When Adam fought Lord Zedd’s rubber monsters, it wasn’t just him in that Black Ranger costume. It was all of us who didn’t fit the mold.