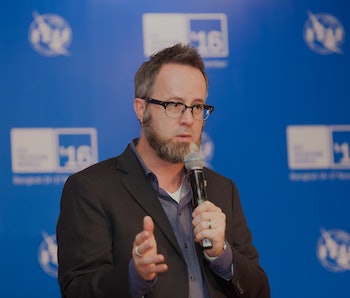 On Tuesday, tech entrepreneur William Hurley took to the SXSW stage to reveal how quantum computers could reshape the future.

Otherwise known as whurley, the tech expert predicted quantum computers could be used to solve some of the world’s most pressing issues. One of them is putting an end to the climate change debate once and for all by capturing and modeling the chaos of real-world climate conditions that can sometimes flummox traditional computers.

“This issue with climate change is that it can be argued because most of the science can be disproven,” Hurley said during his panel. “Because in classical systems, it is very hard to model a quantum system. So what happens is a lot of the forecasts we make, they prove to not be accurate. That gives people the ability to say they aren’t real.”

Quantum computing is so intriguing to researchers because of its incredible potential to crunch an absurd amount of numbers in no time at all. We’re talking numbers that would take classical computers thousands, if not millions, of years to process.

This key feature allows quantum systems to model highly complex scenarios, ones that classical computers would be forced to simplify because of the sheer amount of data.

Quantum systems have this seemingly magical ability simply because of how they store data. Classical computers breakdown information into bits — a series of ones and zeros. Quantum computers use qubits, or subatomic particles that can be one and zero at the same time. This allows them process an unimaginable amount of numbers in tandem.

That’s exactly what you need to model something as multifaceted and variable as nature, according to Hurley.

“Since nature is quantum mechanical and so are quantum computers, we should be able to build much better models of the effects of climate change and really hit home,” he said.

Scientists arguing that climate change is taking a toll on the Earth could then present deniers with extremely accurate models and simulations that they could not refute — assuming deniers are acting in good faith, of course.

In Hurley’s vision, this would hopefully get everyone on the same page regarding climate change and spark unanimous action to try and halt its affects. Of course modeling nature would take a fully functional quantum computer, which is still a little ways off.

Nonetheless, Hurley urged his audience to get informed and get involved in this technology that won’t only help computer scientists, but could completely change the way we interpret the world around us.

More like this
Innovation
Jan. 16, 2023
An ambitious plan could help repair one of California’s biggest ecological catastrophes
By The Conversation, Robert Glennon and Brent Haddad
Science
Jan. 23, 2023
Elephants could be key to saving the planet — here’s why
By Tara Yarlagadda
Science
Jan. 24, 2023
The Doomsday Clock is now at 90 seconds to midnight — here's what that means
By Kiona Smith
LEARN SOMETHING NEW EVERY DAY.
Related Tags
Share: