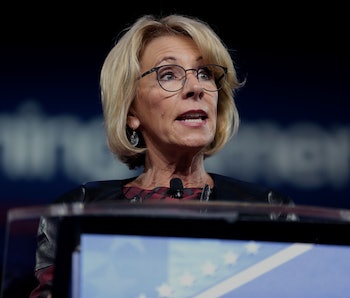 Secretary of Education Betsy DeVos had a disaster of an interview with CBS’s 60 Minutes on Sunday night. DeVos, who was controversially appointed by the Trump administration last year, was questioned about her policy choices and views when it comes to kids’ education by 60 Minutes correspondent Lesley Stahl.

As the richest member of Trump’s cabinet, with arguably the least experience, the billionaire is also the only department head reportedly in need of U.S. Marshals protection due to death threats and protests from students and parents. DeVos’s controversial views — including a push to defund public schools and the promotion of charter and private education in its stead — had her struggling to get her points across on the segment. With no previous experience in public policy, DeVos’s views came under fire from Stahl and viewers during the 13-minute segment.

Here are five instances in which the secretary appeared to be uncomfortable in the hot seat while answering basic questions on 60 Minutes.

On Teachers Having Guns

When asked about the current uproar over stricter gun control and school shootings, Devos agreed with President Donald Trump’s suggestion that maybe teachers should be armed. She said the option “should be considered,” yet awkwardly stated it would have been “scary” if her first-grade teacher would have had a gun back in the day.

On the Education Results Produced by Public Schools

“We have invested billions and billions and billions of dollars from the federal level, and we have seen zero results,” DeVos said of public schools — which 90 percent of American students attend. When Stahl pressed DeVos by saying, “that’s not true,” the secretary refused to acknowledge that public schools’ ratings have improved over time with the help of funding. She continued to plug her agenda of giving parents and students the “choice” to enroll in charter or private schools.

On Not Knowing How Her Home State’s Schools Are Doing

“I can’t tell if they’re doing better,” DeVos replied when asked how public schools in her home state of Michigan are faring right now. When Stahl informed DeVos the schools aren’t doing well, DeVos admitted they “need to do better.” However, she also said she hasn’t “intentionally visited schools that are underperforming” to assess why they’re struggling.

On Sexual Assault on Campuses Across the Country

When Stahl asked DeVos whether she thinks there are as many false accusations of sexual assault cases on campuses as there are real instances, DeVos danced around the issue, saying, “I don’t know, I don’t know.”

The question was asked in regard to the education department rescinding President Obama’s 2011 guidelines about addressing sexual assault instances. “But I’m committed to a process that’s fair for everyone involved,” DeVos continued. This was in defense of her department telling colleges to believe those accused of sexual assault equally to victims’ claims.

On Systemic Racism in Schools

Another Obama-set rule rescinded by DeVos’s department was aimed at preventing school discipline based on race. When asked if students of color would be unfairly targeted now, DeVos said, “We are studying that rule.”

“We need to ensure that all students have an opportunity to learn in a safe and nurturing environment. And all students means all students,” she said.

The interview segment almost instantly gained notoriety, with viewers pointing out the awkward answers DeVos gave during the segment.

Others took the opportunity to meme-ify the clip.

And some just pointed out how painful the segment was to watch.

If you’re up for it, you can watch the entire interview here.

More like this
Culture
Jan. 14, 2023
2,454 years ago, one eerily familiar event led to the downfall of Ancient Athens
By Rachel Hadas and The Conversation
Mind and Body
Jan. 17, 2023
Scientists recommend 5 minutes of walking to combat your worst habit
By Miriam Fauzia
Mind and Body
Jan. 22, 2023
Cyclic breathing: Why experts say just 5 minutes a day can reduce stress
By Sarah Sloat
LEARN SOMETHING NEW EVERY DAY.
Related Tags
Share: