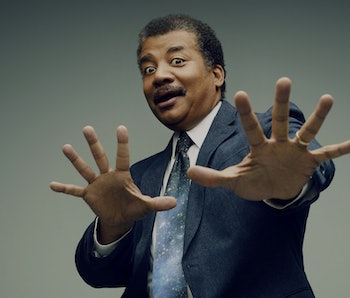 As an avid Star Trek fan, Neil deGrasse Tyson saw a future full of possibilities, but he was convinced that automatic doors would never happen.

Tyson and Star Talk co-host, Chuck Nice, talked with tech Youtuber Marques Brownlee, better known as MKBHD, in a video posted on Friday. During the talk, Tyson explained how the technology lasers and MRIs came to be, but he admits that automatic doors baffled him when he watched Star Trek in his younger days.

“There’s one thing about Star Trek that I could not imagine and it took the realism of Star Trek out of it for me,” he said. “That was the fact that they could walk up to the door and the door would open. How does the door know?!”

Warp drives, photo torpedoes, and transporters were easy to accept for Tyson, but he drew the line at automatic doors.

Brown chimed in wondering if Tyson’s disbelief in the tech came before the automated door was invented. Both Tyson and Nice laughed at the idea that the younger Brown was unaware of how long ago Star Trek was on TV. However, automatic doors were invented in 1954, which was 12 years before the debut of Star Trek.

More like this
Science
9 hours ago
45 years ago, the first Space Shuttle made history without going to space
By Allie Hutchison
Science
8.3.2022 8:56 PM
NASA confirms Artemis I launch date and previews upcoming milestones
By Kiona Smith
Science
8.1.2022 9:15 PM
Long March 5B: Another Chinese rocket makes an uncontrollable entry to Earth
By Jennifer Walter
Share: