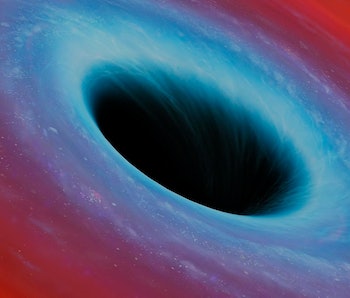 As someone who never got to experience a growth spurt, I am radically jealous of these supermassive black holes that are apparently growing faster than their host galaxies.

Two new studies based on data from NASA’s Chandra X-ray Observatory find that some supermassive black holes — which are millions or billions of times more massive than the sun — can grow faster than the galaxies they reside in. Previous research suggested these kinds of black holes grow as their host galaxies do, but black holes are full of surprises, and this time, it’s no different.

In one study, researchers “calculated the ratio between a supermassive black hole’s growth rate and the growth rate of stars in its host galaxy,” NASA reports. In theory, this ratio would be about the same across galaxies, but the team found that bigger galaxies had much higher ratios. It’s possible that these larger galaxies are giving hungry black holes more “food” to grow. In the case of black holes, “snacks” are probably just cold gas. The team’s findings have been accepted for publication in the April edition of the Monthly Notices of the Royal Astronomical Society.

Another team of researchers observed 72 galaxies at the center of distant clusters and tried to calculate the mass of the black holes within them. According to NASA, the black hole masses were about 10 times larger than what the researchers expected them to be based on “the assumption that the black holes and galaxies grew in tandem.” The group’s research has been published in the February edition of the Monthly Notices of the Royal Astronomical Society.

“We found black holes that are far bigger than we expected,” the study’s lead author Mar Mezcua of the Institute of Space Sciences in Barcelona said in a statement. “Maybe they got a head start in this race to grow, or maybe they’ve had an edge in speed of growth that’s lasted billions of years.”

We get it, black holes — you’re growing. Stop bragging.