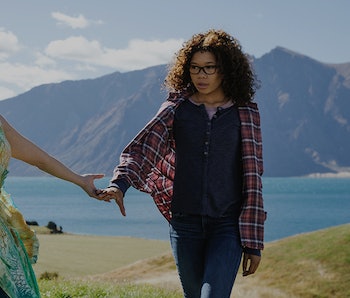 When Ava DuVernay’s adaptation of A Wrinkle in Time was first announced, it sparked a wave of immense anticipation and lofty expectations for the film. The original 1962 Madeleine L’Engle novel is beloved for its unique, massive world-sprawling adventure in a time before such tropes were commonplace. Add to that that DuVernay, coming off the success of Selma, was the first black women to direct a film with a budget of this size. The casting of biracial actress Strom Reid as the start and the addition of Oprah Winfrey herself only added to the hype. However, there’s a wrinkle in this Wrinkle in Time narrative: The movie is apparently pretty bad. Reviews are in, and for the most part, they are savage.

A Wrinkle in Time is an adventure that spans many distinct worlds in which a young Meg Murray sets off to battle evil and rescue her missing father. Teaming up with her brother, a fellow student and three world-traveling beings, Meg embarks on an enormous, planet-jumping mission. Critics clearly were not happy to be along for the ride.

Although the film disappointed most critics, there were bright spots to be sure. Many reviewers praised Reid’s performance as Meg, who is angry about her father’s disappearance and the impact it has had on her life. Washington Post writes that Reid is “a thoroughly capable leading lady.”

Delivering a sturdy, self-possessed performance as A Wrinkle in Time’s heroine, Reid proves a thoroughly capable leading lady, her slightly nerdish appeal something of a twin to Letitia Wright’s precocious young scientist in Black Panther. (Let’s hear it for Girls Who Code.) If the original character’s rough edges have been over-sanded here, Reid is still convincing as a girl who’s angry and grieving over the loss of a pivotal figure in her life, both defiant and afraid of putting a foot wrong.

A good leading lady alone does not make a great film, though. Several reviewers took the screenplay itself to task for the film’s problems, including The New Yorker review, which states the film’s script did not bring some of the best parts of the book from the page to the screen.

The script (by Jennifer Lee and Jeff Stockwell) dulls the sharpest details and eliminates the most idiosyncratic aspects of the novel, including most of the fascinatingly intricate world-building; what remains is a story that delivers emotional moments and delightful details that only vaguely cohere.

A Wrinkle in Time takes viewers on a journey to several vibrant and different worlds. L’Engle pushed readers to use their imagination and Entertainment Weekly writes that the film summarized when it should have simply shown audiences the wonders of the film.

“So A Wrinkle in Time hits that unfortunate un-sweet spot common to big-budget science-fiction/fantasy, where the spectacle feels more summarized than experienced.”

The worlds Meg and her comrades traveled to were visually striking, but Variety argues that spectacle ended up being distracting, an effect which was compounded by sound issues.

A bad sound mix and over-reliance on music drowns out a good deal of the film’s dialogue. At the same time, the design aspects of the film are so consistently distracting that we risk losing sight of its best ideas — not just literary, but also a color-blind agenda that has the potential to change the landscape entirely.

Even though L’Engle’s story does jump from world-to-world, critics felt the film was all over the place. Rolling Stone called the film “flawed” and “wildly uneven.”

This Wrinkle in Time is undoubtedly flawed, wildly uneven and apt to tie itself in narrative knots in a quest to wow you with sheer Technicolor weirdness.”