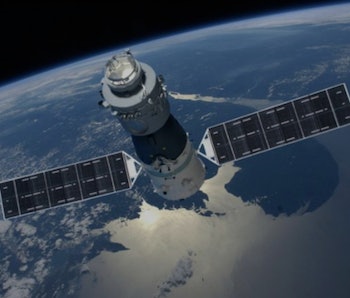 China’s 19,000-lb space station is expected to come hurtling back to Earth sometime in the next few weeks. The thing is, scientists don’t really know where it’s headed.

In January, a not-for-profit group called the Aerospace Corporation reported that Tiangong-1, nicknamed the “heavenly palace,” would be making an uncontrolled re-entry into Earth’s atmosphere sometime in March. While the group had some idea where the giant spacecraft might wind up, it didn’t have many concrete details.

“It is a well known scientific principle that any measurement or prediction will always have an associated uncertainty,” The Aerospace Corporation notes on its website. “In the case of most reentering objects, the uncertainty associated with predicting reentry location is extremely large and precludes an accurate location prediction until shortly before the reentry has occurred…Based on Tiangong-1’s inclination, however, we can confidently say that this object will reenter somewhere between 43° North and 43° South latitudes.”

This week, the European Space Agency (ESA) gave an [updated prediction] on the re-entry’s time and place, but noted the event is still considered “highly variable.”

“The current estimated window is [approximately] March 29 to April 9,” the ESA writes.

Because it’s difficult to know when the Heavenly Palace will pass back through Earth’s atmosphere, it’s impossible to predict where it will land. The ESA reports that Spain, France, Portugal, and Greece are all potential crash sites, with the caveat, of course, being that “at no time will a precise time/location prediction from [the agency] be possible.”

Even though this all sounds ambiguous and scary, there’s no need to panic. For one thing, much of the space lab will likely be burned up in re-entry, so there won’t be a giant hunk of space junk crashing back on Earth. Secondly, the odds of being hit by space junk are incredibly slim — there’s only been one recorded incident of a person being whacked by space debris and she wasn’t severely injured. Talk about bad luck, though.

Keep your eyes on the sky, folks. This is definitely going to be interesting.

More like this
Innovation
8.4.2022 11:30 AM
Look: 9 stunning images reveal a retired satellite's dynamic views of Earth
By Jennifer Walter
Innovation
8.3.2022 7:30 PM
This genetically modified rice could transform the global food supply
By Joanna Thompson
Innovation
8.10.2022 9:00 AM
Scientists may have revealed the ancient secret behind China’s Bronze Age
By Sarah Wells
Share: