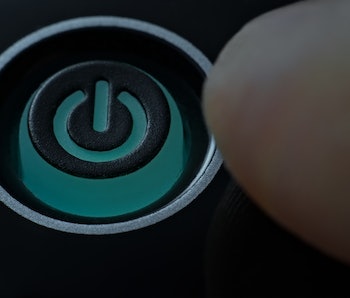 Like the little Dutch boy who saved Holland by plugging a hole in a dam with his finger, an anonymous IT worker was forced to use dextral endurance to prevent a Y2K calamity entirely of his own making back in 1999.

The embarrassing story surfaced on Monday, reported by The Register as part of its “Who, Me?” series, which catalogues the inadvertent flubs and foibles of tech professionals. The tale was relayed to The Register by a man calling himself Jeremy, who worked in IT for a big-time publisher.

According to Jeremy, his team was bracing for Y2K by updating the firmware on their servers. Part of the process required them to restart each server.

The power buttons on the servers were protected by a plastic casing, requiring the workers to insert a screwdriver or similar object to shutdown the server. And the buttons harbored a curious mechanism — like many landmines portrayed in films, the button activated not when it was pressed, but when it was released, an antiquated design by today’s standards.

As it turns out, that design saved the company a whole lot of grief. When the team was turning off one of the servers, an absent-minded fellow accidentally pressed the button on the wrong server. And it was a really important one, too. The unnamed IT worker had unwittingly started to shutdown the server that was responsible for basically keeping their entire digital operations up and running.

Thankfully, the IT guy realized his mistake before releasing the button. He spent the next harrowing hour of his life keeping the button depressed while the rest of the company scrambled to back-up the system and shut it down in the appropriate manner. The whole thing is described like a scene from an IT-themed action movie. Call it Mission Impossible: Easily Avoidable Mistake.

Not only is this a great fable for the tech-savvy, it’s a real lesson in design. Sometimes we need these redundant, failsafe mechanisms to stop us from making horrible mistakes. The release-based trigger is the physical equivalent of an “Are you sure you want to do this?” pop-up, and in this case, it paid dividends.

Hopefully we can all avoid situations like this in the future. At the very least, no one should be in such a precarious position until Y10K comes around.