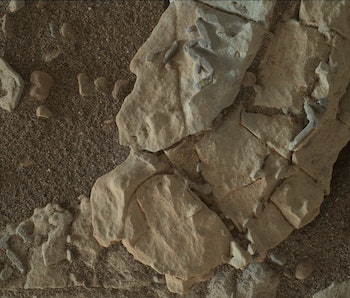 Back in early January, NASA’s Curiosity Mars rover made a new geological discovery that is now the subject of some extraterrestrial controversy.

The image Curiosity beamed to astronomers was of an exposed bedrock on the planet known as “Jura.” Upon further inspection, scientists noticed these sesame seed-sized crystals, which they believe are evidence that water once flowed across the red planet.

Barry DiGregorio, a research fellow at the University of Buckingham, had a completely different opinion on the origins of these rock formations: Aliens.

“If you look at the images more closely … this actually has features in it that are reminiscent of trace fossils,” he told the Daily Star.

DiGregorio has a reputation for making such claims. He has written two books which claimed to show evidence pointing to life on Mars. But this time he announced that he’s sitting on a “bombshell” report that would further argue this Curiosity picture shows signs of alien life.

These comments caused quite the media uproar:

While we’d all love to believe that life once walked the surface of Mars, there is little to no evidence to support DiGregorio’s claims, and there’s a whole a lot to bolster NASA’s rebuttal. Imperial College London geologist Sanjeev Gupta, who is also a Curiosity Science Team member, believes this is simply a crystal formation.

“These shapes are characteristic of gypsum crystals,” said Gupta in a NASA statement. “These can form when salts become concentrated in water, such as in an evaporating lake.”

There have been widely reported findings of water on the Martian surface, which is highly indicative that water is the culprit for this rock formation.

Ashwin Vasavada, a Curiosity mission scientist, also pointed out it’s pretty much impossible to tell what caused a rock formation without close examination, which means there’s no way to tell these are fossil footprints. Given how extraordinary a claim that would be, that’s not the sort of thing anyone should just assume when much, much likelier alternative explanations exist.

“That’s pretty challenging on Earth to distinguish those two things without being able to put these things into a lab to look for the presence of organics,” Ashwin Vasavada told Space.com. “We have a very limited capability overall to understand whether something is biological or not.”

Sadly, most signs point to not aliens this time. But further evidence of water is always a good as astronomers utilize missions, like Curiosity, to continue their attempt to tap into the secrets that Mars holds.

More like this
Science
8.5.2022 12:15 PM
10 years ago, the Curiosity rover arrived on Mars — and revolutionized the hunt for alien life
By Allie Hutchison
Science
7.28.2022 9:00 PM
NASA greenlights two new Mars helicopters and lengthens Perseverance’s resume
By Doris Elín Urrutia
Science
9 hours ago
45 years ago, the first Space Shuttle made history without going to space
By Allie Hutchison
Related Tags
Share: