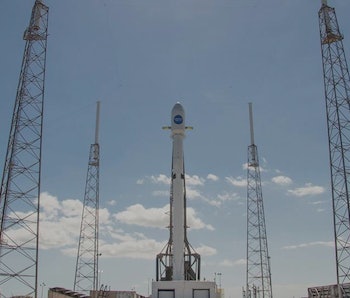 When the launch window opens in the early minutes of Tuesday morning on the East Coast, SpaceX will make history.

The midnight-hour mission will be the 50th Falcon 9 rocket flight, and SpaceX will launch the largest geostationary satellite in its history.

The Hispasat 30W-6 satellite is “almost the size of a city bus” SpaceX founder Elon Musk declared on Twitter on Monday.

The telecom satellite weighs more than 13,200 pounds and is expected to last fifteen years. It was built by SSL in Palo Alto, California for Hispasat, a Madrid-based telecommunications company that serves the Iberian Peninsula. According to the company, the satellite will serve Europe and North Africa and the Americas.

However, the satellite won’t be the heaviest in SpaceX history: That was the 14,905-pound Intelsat 35 e mission in July 2017.

Don’t expect the rocket to land on the droneship landing Of Course I Still Love You in the Atlantic Ocean, though.

“SpaceX will not attempt to land Falcon 9’s first stage after launch due to unfavorable weather conditions in the recovery area off of Florida’s Atlantic Coast,” SpaceX said. Conditions for the launch remained 90 percent favorable on Monday afternoon.

More like this
Innovation
3 hours ago
A wild new plane-train hybrid could whoosh you to your destination — if it can get off the ground
By Molly Glick
Entertainment
8.5.2022 12:30 PM
For All Mankind Season 3’s space mogul is better than Elon Musk — here's why
By Ryan Britt
Innovation
8.5.2022 6:30 PM
This breakthrough stem-cell therapy could reverse genetic blindness
By Charles Q. Choi
Related Tags
Share: