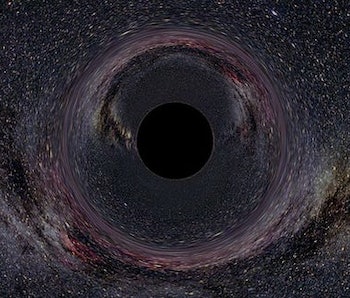 It was September 14, 2015, almost exactly 100 years after Albert Einstein formulated the General Theory of Relativity. Two massive detectors, one in Louisiana and one in Washington, were undergoing final preparations for a science run aimed at detecting gravitational waves. Suddenly and unexpectedly, the detectors’ instrumentation recorded a peculiar chirp. If we made this chirp audible, it would sound like a faint, low-pitched thump.

Five months later, after careful scrutiny of the data recorded by these detectors, the Laser Interferometer Gravitational Wave Observatory (LIGO) publicly announced their results. That chirp was exactly the sort of signal they had hoped to detect. It was the distant echo of a pair of black holes caught in the act of merging into a single, larger black hole. The physics community was electrified. It was as if we had lived for all our lives blind to the color red, and at the moment the veil was lifted we saw a rose for the first time.

And what a rose it was! Best estimates from LIGO indicated that the faint thump they recorded was the result of the coalescence more than a billion years ago of two black holes, each of them roughly thirty times the mass of the Sun. During the collision, some three solar masses’ worth of energy from the black holes was vaporized into gravitational radiation.

Black holes and gravitational waves are both consequences of Einstein’s general theory of relativity. General relativity predicts what sort of gravitational waves the LIGO detector should see in the event of a black hole collision, and the chirp recorded on September 14 was beautifully close to expectations. Not only is it a vindication of long-cherished theoretical ideas; this first detection event also augurs a new era of gravitational wave astronomy. The LIGO detectors saw one event of the sort we’ve dreamed of for decades. Now we want to explore a whole new garden of gravitational surprises. Science seldom involves mathematical certainties, so we should ask, how sure are we that LIGO construed correctly that the little chirp is the distant echo of a billion-year-old black hole merger? Briefly, the answer is, “Pretty sure.”

Everything seems to fit. The signal was seen by both detectors. Nothing else seemed to be happening nearby that would explain the signal. The signal was strong enough to see with the current device, but too weak to be observed by earlier technology. The hypothesis of a black hole merger a billion years ago doesn’t conflict with our general understanding of astrophysics and cosmology. The key point is that we have good hopes of seeing more such events. Indeed, LIGO announced a second confirmed event that occurred on Christmas day 2015, and a third that occurred on January 4, 2017. These events are broadly comparable to the first discovery and should give us significantly more confidence that LIGO is truly observing black hole mergers. Altogether, we believe that we are standing at the dawn of a new age in observational astrophysics—one in which black holes will play a pivotal role.

This excerpt is from Frans Pretorius and Steven S. Gubser’s book The Little Book of Black Holes (Princeton University Press, 2017) and is reprinted with permission from the publisher.

More like this
Science
8.12.2022 12:30 PM
Astronomers pinpoint the source of a mysterious cosmic particle
By Kiona Smith
Science
8.13.2022 5:00 PM
Astronomers discovered the earliest known dark matter — and it's not behaving as predicted
By Jeff Nagle
Science
8.6.2022 5:00 PM
Earth is spinning too fast — the consequences for timekeeping may be unprecedented
By Andrew Moseman
Related Tags
Share: