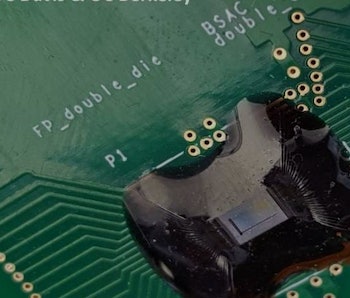 Fingerprints are one-of-a-kind and that’s precisely why fingerprint sensors have become such a popular mode of security in modern day devices, from smartphones to smart cars. But you don’t need to be a wunderkind hacker to get through some protections. The iPhone 6’s capacitative sensor, for example, can be tricked by simply using a high-quality image of the unlocking fingerprint.

To fix this situation, scientists have developed a new sensor, one that uses ultrasound. In a new paper published in Applied Physics Letters, researchers from the University of California, Davis outline their design for a fingerprint sensor that measures an ultrasonic image of the finger — not simply to recognize more fine features on your fingertips, but also to gather information about the flesh under the skin.

“The ultrasound image may allow discriminating between a live finger and a printed fingerprint — a vulnerability of capacitive sensors,” said the study’s lead author David Horsely to Tech Times.

It’s actually a pretty simple system. The sensor bounces ultrasonic pixels off the finger. Those pixels reflect back to the sensor, which constructs a 3D image of the finger tip and the tissue underneath. Because that tissue remains the same no matter what condition the skin is in—be it wet, dry, oily, or dirty—the sensor will always be able to recognize the unlocking finger. It’s a design that has been heavily drawn upon for medical applications, where undamaged skin can never be guaranteed.

A sensor like this won’t hit the market soon because ultrasonic sensors are currently twice the cost of capacitative sensors. But the cost will follow the laws of consumer tech and go down. And when that happens, fingerprints—at least the surface—will become more and more obsolete, like what’s happening to conventional password systems right now.

One of the most interesting things about this new security approach is that it opens the device up to ancillary ultrasound uses. Medical apps and a thousand other applications can be found for this technology. What will begin as a security measure will become something else entirely.

More like this
Science
Oct. 4, 2022
Three physicists win the Nobel for groundbreaking work on quantum entanglement
By Elana Spivack
Innovation
Sep. 21, 2022
Look: Drones could be the future of 3D-printed architecture
By Jennifer Walter
Science
Sep. 24, 2022
Is a fact always true? A philosopher explains how to spot the difference
By Peter Vickers and The Conversation
Related Tags
Share: