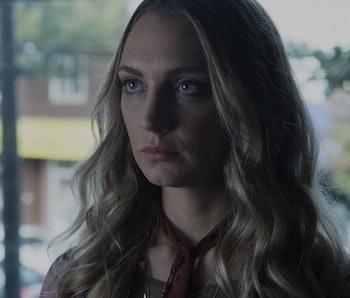 Almost every insane plan that the gang comes up with on Syfy’s The Magicians involves using Penny’s powers as a Traveler, but now that he’s dead and stranded on the astral plane, they need an alternative. Which is where actress Hannah Levien (@HannahLevien / @realHannahLevien) comes in, reprising her role as Victoria, a Traveler from Season 1 who was imprisoned by The Beast and just returned to the show.

Inverse caught up with Levien to hear more about her character’s return to the show and what it means for the Magicians to finally have another Traveler on the squad. Poppy and Quentin recruited her help in Episode 7 — “Poached Eggs” — for a dangerous mission to the Underworld to retrieve a Golden Key. If her fierceness and badass knuckle tattoos are any indication, then she might be way more badass than Penny.

“We knew only a little bit about her backstory when she was trapped in that dungeon,” Levien tells Inverse. “But now she’s got power back in her life, living in New York and doing her own thing. Victoria has a second chance.”

Victoria retains the ability to Travel even with magic cut off from all the humans on The Magicians. Like Penny said in the season premiere, Travelers are basically their own kind of magical creature, which sort of makes Victoria one of the most powerful Magicians in the multiverse right now.

“She’s still someone that pushes boundaries,” Levien explained. After all, this is the woman who once took her whole class on a spring break trip to Fillory. But with the exception of Josh Hoberman and Poppy Kline, everyone else was killed horribly by The Beast. That tragedy weighs on Victoria.

“She’s far more aware of risk now,” Levien said, “and doesn’t want to put people in harm’s way again. She’s been building a more secure life for herself with her magic.”

That involves working with Harriet, the Magician who runs Fuzz Beat, a clickbait article generating platform that’s actually a free version of The Library available to all Magicians — something that neither The Library nor Brakebills are happy about. “Victoria will always be someone that challenges authority,” Levien said. “So it’s no coincidence that she’s working with Harriet now on this alternative approach to magic, paving their own way. We see more of that develop in the next episode.”

In “Six Short Stories About Magic,” it looks like Harriet somehow gets the chance to confront the head librarian, which probably means Victoria will take her there as part of the plan to get the Depression Key back.

“She has a very strong moral compass,” Levien explained, and Victoria isn’t afraid to fight her own battles. When Poppy turned up at Victoria’s door asking for help, Victoria called Poppy out for being a bad friend. It takes Penny talking to Victoria to try and enlist her help, which is how Kady and Harriet get involved.

With only a few episodes left in the season, it’s about time for big plans to kick into high gear, and with all these different magic-less Magicians involved, they’re definitely going to need Victoria’s help.

The Magicians airs Wednesdays on Syfy at 9 p.m. Eastern.