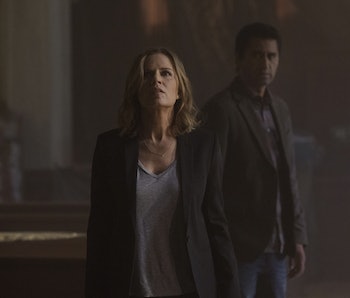 The Walking Dead has ceased fearing zombies. In recent seasons, walkers chill in the background as Rick tries to teach Carl how to grow tomatoes and whatnot. But, in the new teasers for the upcoming Fear the Walking Dead, the audience is reminded that the undead can be total assholes and are worth avoiding.

The teasers, which aired last night during the premiere of Humans, offer the first real look at the upcoming series. Set in Los Angeles, Fear the Walking Dead followers a tiny group of survivors during the same apocalypse that has plagued The Walking Dead. In some vague form, AMC seems to be channeling HBO and its own successful dark serial, True Detective. If it worked in the south, it’ll work in LA.

Besides inhabiting the same-ish geographical region as the original Dead, True Detective’s first season created and owned its distinctly Southern and distinctly desolate world. The shows’ character were all forced to play a game of survival with unclear rules. Fear the Walking Dead appears to do what season two of True Detective is attempting, forcing its inhabitants to play by the same rules, but complicating things by putting the characters in an improbable, unknowable city.

If characters on the original show talked about getting to D.C. like it was Mars, LA is in an entirely different solar system altogether, more hostile to human life.

In the second teaser, we get a better look at some of the characters, specifically Madison (Kim Dickens), a high school guidance counselor and least likely protagonist for a zombie apocalypse. Her student: A fat, pimply-faced nerd talking about conspiracies. It’s a groundbreaking portrayal for sure. But in a way it’s kind of cute, like Fear the Walking Dead decided to ape ‘80’s-style horror movies with super exaggerated stereotypes. It’s only tradition for The Walking Dead anyway, everyone in Rick’s first group practically filled out RPG archetypes and movie tropes to a T.

Fear the Walking Dead is scheduled to debut sometime in August.