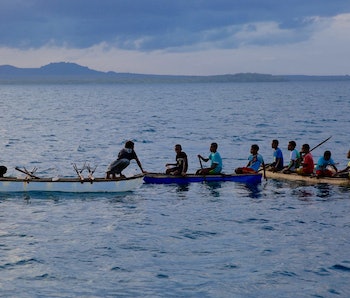 If you were to spend some time on the remote archipelago of Vanuatu, far off the eastern coast of Australia, you would hear snippets of over 120 different languages. All of those languages are descended from a single Austronesian mother tongue, brought to the island chain by some intrepid settlers from East Asia some 3,000 years ago. Since the archipelago is so isolated, you might think that the people who maintained that language through the years are, likewise, descended from the initial settlers.

That’s what many scientists thought too, until a new genetic analysis, described Tuesday in Nature Ecology and Evolution, revealed that the language and its offshoots far outlived the settlers who first brought it to the islands.

In the paper, an international team of researchers led by scientists at the Max Planck Institute for the Science of Human History report that the Lapita people, the first humans to land in Vanuatu, brought their Austronesian language to the islands but are no longer reflected genetically in the present-day Vanuatu gene pool.

In fact, the analysis of DNA from the bones and teeth of 19 ancient people from the region — Vanuatu, Tonga, French Polynesia, and the Solomon Islands — shows that the Lapita people were replaced shortly after they arrived. In the study, the researchers compared the ancient DNA to the genomes of 27 currently living in Vanuatu to see how much still matched up.

The Lapita people traveled during the tail end of the long migration wave — the Austronesian Expansion — that began in present-day Taiwan 5,500 years ago. Today, the present-day population of Vanuatu are genetically not at all like the Lapita; instead, they’re more similar to the indigenous people of Papua New Guinea and the Bismarck Archipelago to the northwest. Nevertheless, they still speak languages descended from the Lapita’s mother tongue.

The staying power of the Austronesian language in relation to the disappearing genes of its speakers suggested to the authors that the people who eventually replaced the Lapita did so gradually rather than all at once, thus giving them time to adopt the islands’ native tongue. What most likely happened, the authors write, is that the seafaring indigenous people of Papua New Guinea and the Bismarck Archipelago braved the journey to remote Vanuatu multiple times, slowly adopting the ways of the island chain as their own while filling the local gene pool with their own DNA.

“Our analyses show that this replacement did not occur in a one-time mass migration event but rather happened incrementally over time, suggesting an enduring long-distance network between groups in Near and Remote Oceania,” said Cosimo Posth, Ph.D., a co-lead author of the study in a statement on Tuesday.

Today, most traces of the Lapita may be gone, but their legacy lives on in the 120-plus languages that descended from their Austronesian dialect; all of them are still spoken in Vanuatu, making it the most linguistically diverse place on the planet. Their story calls to mind the tale of another disappearing ancient population who live on only in their cultural artifacts: namely, the early Britons, who built Stonehenge then were genetically replaced by migrants from the east. Together, these stories support an idea that is overturning a lot of old notions about our ancestors; that, unlike us, ancient humans cared less about claiming lands as permanent settlements and were much more migratory than we’d ever imagined.

More like this
Science
7.5.2022 12:00 PM
The greatest dinosaur sci-fi franchise ever reveals a problematic genetics debate
By Andrew Maynard and The Conversation
Science
6.21.2022 10:45 AM
Ancient stalagmites point to a massive drought that upturned 6th century Arabia
By Allison Parshall
Science
6.22.2022 8:26 PM
Yes, there are mites living on your face — and they can poop, a new study finds
By Allison Parshall
Related Tags
Share: