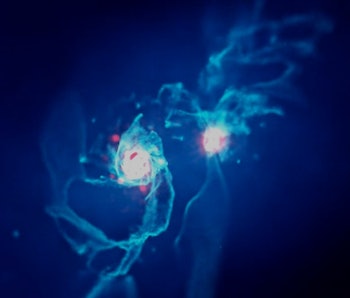 The Milky Way certainly has its perks. It’s big and swirly, and best of all, we live there! But for many years, research suggested our neighboring Andromeda galaxy had at least one major point over us — it’s bigger. At least that’s what we thought.

A new study published February 15 in the Monthly Notices of the Royal Astronomical Society finds that the Andromeda galaxy is actually around the same size as our own galaxy. Scientists previously thought Andromeda was about two to three times the size of the Milky Way, and that it would one day swallow us up in a galactic smashup billions of years away. But researchers using a technique to measure “the speed required to escape a galaxy” have figured out why Andromeda is smaller than research has suggested, according to the International Centre for Radio Astronomy Research (ICRAR). This could seriously change the outcome of that eventual merger.

“When a rocket is launched into space, it is thrown out with a speed of 11km/s to overcome the Earth’s gravitational pull,” the study’s first author, Prajwal Kafle, an astrophysicist at ICRAR, says in a statement. “Our home galaxy, the Milky Way, is over a trillion times heavier than our tiny planet Earth so to escape its gravitational pull we have to launch with a speed of 550km/s. We used this technique to tie down the mass of Andromeda.”

According to the team, scientists might have thought Andromeda was bigger than it actually is due to the amount of dark matter they assumed it had. Dark matter is the mysterious stuff that is thought to make up about 80 percent of the universe’s mass.

“By examining the orbits of high speed stars, we discovered that this galaxy has far less dark matter than previously thought, and only a third of that uncovered in previous observations,” Kafle says.

This finding is more than a point in a meaningless, petty battle between our galaxy and Andromeda, though it is totally that, too. It also indicates that astronomers should conduct more research to predict what could happen when the Milky Way and Andromeda merge in about 4 billion years.

“It completely transforms our understanding of the local group,” Kafle says. “We had thought there was one biggest galaxy and our own Milky Way was slightly smaller but that scenario has now completely changed.”

More like this
Science
8.1.2022 10:00 AM
A powerful new dark matter facility could finally unlock physics’ most elusive mystery
By Andy Tomaswick and Universe Today
Science
8.10.2022 7:15 PM
Beware! Dramatic image of spiral galaxies previews the future fate of the Milky Way
By Kiona Smith
Science
8.7.2022 11:00 AM
Webb Telescope discovers an “amazing” galaxy from the edge of time
By LAURENCE TOGNETTI and Universe Today
Related Tags
Share: