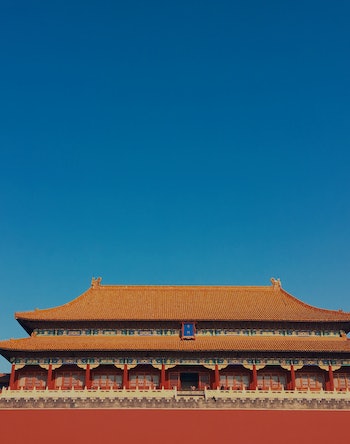 It also included Frank Gaffney, head of the Center for Security Policy, on the second-to-last day, in an afternoon panel that was overlooked by the media. It was objectively bonkers. Gaffney put on a master class in how to take half-cooked conspiracy theories that live on the internet to the public stage, in real life, at the same conference of which the president attended.

A self-styled security expert, Gaffney is considered an extremist by the Southern Poverty Law Center, who notes the once-respected Washington insider is “gripped by paranoid fantasies about Muslims destroying the West from within,” which his Twitter history shows.

At his appearance last Friday, Gaffney didn’t talk about Islam at all, instead revealing he has much of the same levels of concern about China. The below tweet, which he posted four times in five days last summer, speaks to Gaffney’s line of thinking.

In a breathtaking five-minute presentation, Gaffney ran through a series of remarkable claims about the threat China supposedly poses to the United States. Let’s take a look.

The Claim: “They’re trying to buy into the Chicago Stock Exchange so they can more effectively manipulate our financial institutions.”

Gaffney was referring to the recently blocked sale of the Chicago Stock Exchange to a group of Chinese investors. The subject of more than a year’s review, the sale was approved by the Committee on Foreign Investment in December 2016 and by Securities and Exchange Commission staffers in August 2017, at which point the Trump-appointed SEC chair blocked the deal. The SEC officially killed it on February 15, arguing there was insufficient information on the investors to monitor their dealings after the sale.

Either way, it’s hard to argue the Chicago Stock Exchange is really the key to total domination of the American financial landscape, considering it handles just 0.5 percent of all equities trades in the United States.

The Claim: “You’ve heard perhaps of quantum computing. The Chinese are considered to be in advance of us in that respect, which will give them an ability to have codes that cannot be broken and easy ability to break ours, among many, many other applications.”

It’s fair enough to say Chinese researchers are at the cutting edge of using quantum physics to send unhackable signals, as a Chinese satellite sent such a signal in August of last year, and another test this January saw photons beamed between China and Europe.

But this technology is fragile and still very much in its infancy, and the extent to which this is a major part of China’s military strategy as opposed to its scientific research isn’t nearly as clear as Gaffney suggested. All countries, the United States very much included, do consider the tactical implications of new research, but he was taking the direst possible reading as an absolute certainty, which was a theme of his talk.

Besides, Gaffney’s use of the term quantum computing is at best imprecise, as that more general breakthrough likely remains decades away from being a practical reality.

The Claim: “They are cornering the market, if they haven’t already on things like rare Earth minerals and the sorts of products that are essential to our agriculture system. For example phosphorus and potassium. These are things that are absolutely indispensable, not just to our economy but to our supply of food, our survival indeed.”

China does happen to produce the vast majority of rare Earth minerals currently on the market. However, as a 2010 Foreign Policy article explains, that’s not because China has any actual geographical advantage, as plenty of other countries have similar resources they could start extracting if they so wanted.

It’s just that China is willing to sell the minerals at such a cheap price that no other countries have had any real need to develop their own resources to compete. If China did make some kind of move to take advantage of its current monopoly, other countries could start ramping up production, and its power would be broken.

The Claim: “Chinese nationals in this country — not all of them, but many of them — are induced to engage in espionage. An enormous force multiplier for those who are doing it officially for their government.”

To the extent it’s even possible — or worthwhile — to evaluate a McCarthyist claim like this about the millions of Chinese-born individuals living in the United States, the crux of it likely goes back to the testimony of billionaire businessman Guo Wengui, who lives in self-imposed exile in New York. Among other claims, Wengui has said Chinese espionage activities in the U.S. include about 18,000 recruited agents, though this has not been given much credence outside conservative media circles.

The Claim: “About 80 percent of the U.S. electronics market is now supplied by China. Imagine that! This means among other things the cameras that we use for all kinds of home monitoring and other surveillance — official, government, state, even national security — are being compromised because they are being supplied to us by China. You don’t think they’re taking advantage of that? Of course they are.”

A Wall Street Journal report from this past November did explore how the Chinese government owns a 42 percent stake in the major camera manufacturer Hikvision, but nobody has even remotely proven Gaffney’s claim of obvious malicious intent.

A U.S. Army base in Missouri did replace five Chinese-made surveillance cameras this January, though not because of any provable security concerns. The base’s chief of staff told The Wall Street Journal that “we never believed [the cameras] were a security risk” as “they were always on a closed network.” The base removed them to expel any negative perceptions following media reports about the Chinese connection rather than anything substantive.

The Claim: “Talk about the internet of things. The Chinese are in a position not only to exploit all of the information flows that will operate on that system of internet-dependent wireless communications, everything from your refrigerator to your car. They will be able to operate against them, perhaps even to use them to kill us. By driving that self-driving car off the road, for example.”

A team of Chinese security researchers did show how to hack a Tesla Model S in September 2016, demonstrating among other things the ability to take control of the car’s brakes. But then, those researchers immediately disclosed the nature of the problem to Tesla so that it could be fixed going forward, which is the point of such research in the first place.

The Claim: “Electromagnetic pulse is one of the instruments of unrestricted warfare that the Chinese are prepared to engage in against us.”

Yes, Chinese researchers have developed an EMP weapon using high-powered microwaves. Whether China would actually look to deploy such a weapon in some kind of offensive strike as part of an all-out attack against the United States is a whole other question. Gaffney would absolutely answer that question in the affirmative, as would likely all his fellow CPAC speakers, but that’s definitely not something that can just be accepted as fact.