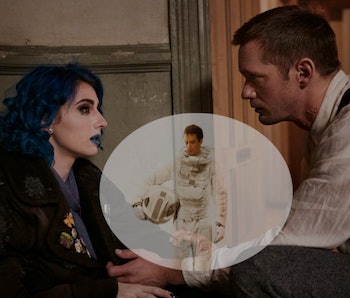 The new moody crime sci-fi drama Mute is not a direct sequel to the 2009 cult favorite Moon, but they are set in the same fictional futuristic universe. Sixteen years ago, Duncan Jones originally conceived of Mute as a very different film, but once it became a science fiction project, he knew how the Moon easter eggs would make sense.

Mild spoilers ahead for Moon and Mute.

On Friday, Netflix released the highly anticipated film Mute, a crime-thriller set in a Blade Runner-esque gritty noir future version of Berlin. Calling Mute a sci-fi movie wouldn’t be wrong, but it’s more like a regular movie that just happens to be in a sci-fi world.

In Moon, a lone astronaut named Sam Bell (Sam Rockwell) discovers he has been cloned against his will in order to facilitate a perpetual stay in a Moon base. The film ends with him escaping in a spaceship, and heading back to Earth to reveal the corruption of his employer; Lunar Industries.

Mute isn’t about Sam Bell at all. Instead, it focuses on a mute bartender named Leo (Alexander Skårsgard) innocently embroiled in crime caper in which his girlfriend Naadirah (Seyneb Saleh) goes missing early in the film. So, Mute casually exists alongside Moon, with just a few easter eggs connecting the two. When Leo watches a newscast, we see Sam Bell clones bitterly declaring “we’re all named Sam Bell!” This newscast confirms that there are 156 clones.

“We had the opportunity with poster campaign of freeing Sam Bell,” Jones explains. In one scene in the movie, the visage of Sam Bell pops up again, as Leo strides through the future-Berlin marketplace.

But, in a bizarro universe, Rockwell would have played Leo in a very different version of Mute. Jones explains that sixteen years ago, he intended to make Mute as a contemporary crime film, starring Rockwell.

“Sexy Beast and Layer Cake had just come out and there were these British gangster films coming out that were being made on conservative budgets,” he says. “So, I was thinking Mute was going to be a contemporary London gangster movie. Originally, Sam Rockwell wanted to play Leo. We talked and realized Mute was not going to happen. But, that meeting is when I decided I was going to write something for Sam Rockwell. I thought: Sam Rockwell is so damn cool. I need to make my first film with him.”

Jones also reveals that the process of making Mute mirrored the internal themes of Moon. Because Sam is faced with clones of himself, the meditation on who you are at different points in your life becomes central to that film’s story. This became the real-life struggle for Jones in making Mute, a film originally created by a much younger man.

“In getting sixteen years older, I went through a lot: my parents dying, having a kid of my own, all these things that happen in your life that kind of made Mute what it is now,” he says, referencing at least one death many will be familiar with. Jones’s father was David Bowie.

“Moon was about facing different perspectives of yourself and how you saw the world at different times. But I had that experience on Mute. I saw the project one way sixteen years ago, and it has evolved dramatically over that decade and a half.”

Jones is also philosophical about the genre of science fiction, specifically noting that the stylistic trappings of noir sci-fi is more important to him than specific mediations on technology.

“It’s a film that isn’t dependent on a great technological change,” he explains, and connects his approach on Mute to what he considers to be success of Blade Runner.

“Something like Blade Runner does require us to believe in the technology of Replicants and all that, but it’s really about the characters,” Jones says. “You could very easily change Blade Runner, take out the science fiction setting, and the technology, and you’d still have a really good thriller. It still works. I wanted Mute to be like that.”

Mute is streaming now on Netflix.