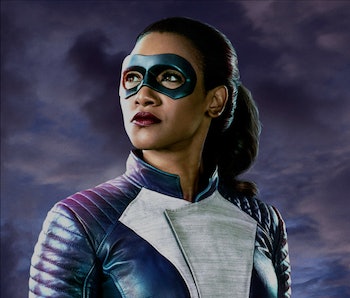 For those wondering how Iris becomes a speedster, here’s your answer. There’s also the added bonus of seeing her the suit she will wearing on The Flash when saving Central City as its speedster.

On Thursday, The CW revealed actress Candice Patton in Iris West’s new superhero costume, along with details of the upcoming episode “Run, Iris, Run” airing March 13. In the episode, the rogue metahuman Metling Pot (played by Leonard Nam), who has the power to switch people’s DNA, transfers Barry’s speedster powers to Iris. It seems Cisco wastes no time making Iris a costume to go with her powers.

The episode will provide an interesting new dynamic with Iris out in the field and Barry at STAR Labs running the mission. Iris has stepped up on the series taking charge of the team while Barry was in the Speed Force and asserting her leadership after his return, which led the couple to therapy. Odds are they will have reason to return to the doctor. In the meantime, Iris will get herself a great new suit to wear while she is fighting crime.

The other theory about Iris’ new powers was her own pregnancy causing her to obtain abilities. The Flash made that option possible when Joe West’s fiancée Cecile started exhibiting the ability to read minds after she was pregnant. The introduction of Jessica Parker Kennedy’s mystery girl, who many believe is Barry and Iris’ daughter from the future, and Cecile’s new ability could have explained how Iris would get powers when that news was announced. Kennedy could still be Dawn Allen and Iris could reveal she is pregnant, but it seems Iris’ temporary speed will come courtesy of Melting Pot.