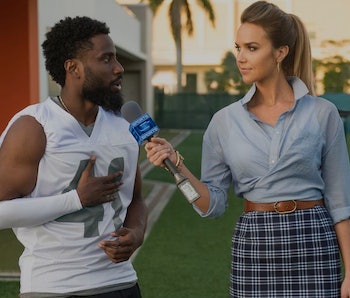 While it’s not clear if the writers of HBO’s new Ballers have ever watched an NFL game — the series rides on the preposterous notion that the Dolphins are some kind of modern dynasty and that a bunch of deeply unlikely transactions are plausible — they’ve definitely seen Hard Knocks. The inter-squad training camp tensions, played up to the extreme, are there. We’ve got money. We’ve got women. We’ve got entitlement and competition. And we’ve got men making business decisions for personal reasons (and vice versa).

In Episode 2, we found Spencer furthering his crusade by getting in with Vernon, a rookie who is wasting a lot of his money by comping everything for his vast entourage. Strassmore sees himself in the kid, and while he wants to help him out, he sees an opportunity to score for his bosses. Ricky, cut by the Packers only to be picked up by the Dolphins, is also looking to capitalize on his second chance.

Challenges abound. Reggie, Vernon’s friend and erstwhile “business manager,” is standing in the way of a clear communication between Vernon and Spencer. Spencer is broke as fuck. Another receiver is wearing Ricky’s number, 18, and refuses to let Ricky buy it off of him. (For some reason, the Dolphins assign Jerret #41 which is an illegal number for receivers, but then Jerret picks up a picture of his dad in a Bears uniform, #81, and has a moment.) Charles, slightly outside the frame, is thinking about his return to football and trying to hide it from his wife, who wants him to focus on what’s next.

Whether any of these dynamics are “good” or “interesting,” the show is watchable, which is something. Every character has strange hangups — for instance, Jason the super agent is terrified of flying for some reason — which makes the show feel like it’s in its own insane universe. Player decisions or epiphanies happen on what I’d like to call the Empire decision structure; growth is possible instantaneously, and minds are changed enough to act on a new mindset in a moment. Vernon and Reggie acquiesce to Spencer, and Charles makes up his mind to return to the football after having a casual convo in the parking lot of the Chevy dealership where he’s now working. The wheels, well, they’re in motion, even if “Raise Up” didn’t race to any certain climax.

Ricky, who is in an open relationship but promises to end his hound-dogging, is probably the most interesting redemption story; John David Washington has proved himself to be an engaging talent so far.

Thoughts for next week: Still waiting for a realistic NFL thing to happen, but enjoying the fantasy football.