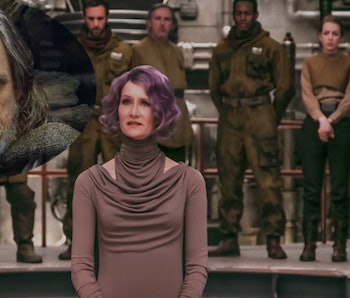 In an alternate reality of a galaxy far away, Jedi Master Luke Skywalker managed to meet heroic Resistance leader Admiral Holdo face-to-face. Mark Hamill has teased the existence of a deleted scene from Star Wars: The Last Jedi in which he shared the screen with Laura Dern.

Spoilers ahead for The Last Jedi.

On Monday, Mark Hamill posted pictures on his Instagram account of himself and Laura Dern. Though none of the pictures show them in costume for The Last Jedi, Hamill’s caption made it pretty clear that they had had scenes together that didn’t make it into the film’s final theatrical cut. Hamill wrote “It was nice almost working with you. xoxo from your deleted scene partner.”

But how and when could Luke and Holdo have met? In the version of the film we all saw, it seems like there is no way this could have happened without a few huge changes in the story.

Because Admiral Holdo pilots a giant Resistance ship on a hyperspace suicide mission in a pivotal moment, the character dies before Luke would have had a chance to meet her. When Luke’s living Force ghost appears on the planet Crait to play mind games with Kylo Ren, Holdo is clearly not with them. So why did Mark Hamill and Laura Dern film scenes together?

It seems like there are three options here. First, Hamill is using the term “deleted scene” liberally and he and Dern didn’t have scenes together. He’s kidding around because he was in the same movie with Dern and didn’t get any scenes with her and is just laughing about that fact.

Second, there was some kind of flashback scene where Holdo, Luke and Leia are all conferring about something. Maybe Holdo was aware of what had happened with Luke’s Jedi Academy way back when. We know Luke flew his old X-Wing to hide out on the planet Ahch-To. But did he steal it from the hangar bay of a ship Holdo was running? Maybe there’s some great scene where Luke is like getting into an X-Wing and Holdo is like “Hey, man, we need that ship. Give it back.”

Finally, if Luke and Holdo did have scenes together, it means aspects of the script were changed while filming. Could there have been a version of The Last Jedi where Holdo lived? Perhaps both Luke and Holdo survived in a different cut of The Last Jedi. Who knows? Maybe they even made it to the Millennium Falcon in the end.

The Blu-ray and digital release of The Last Jedi doesn’t have an exact release date. But, it is expected sometime in spring. Some deleted scenes have already been teased and described. However, director Rian Johnson told Inverse on December 15, 2017, that there are no deleted scenes featuring the late Carrie Fisher.