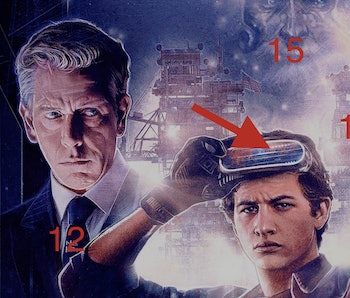 No one should really be surprised that the Ready Player One movie will contain a bunch of nods and easter eggs connected to other sci-fi and fantasy movies. After all, the plot of the novel on which the film is based is literally about people finding easter eggs inside of an immersive virtual reality world. But even the poster for the film alone has at least fifteen easter eggs hiding in plain sight.

On Tuesday, Warner Bros released the official full poster for Ready Player One. In it, Wade Watts poses triumphantly, twice. Once as his real-world self, and again as his virtual reality avatar, “Parzival,” next to his friend an ally, Art3mis.

But there are a lot of other references going on in this poster, too. Because the OASIS — the virtual reality world of Ready Player One — is mostly based on the Eighties, nearly all of the references in the poster seem to recall the pop culture of the Eighties, too. Here’s everything you might have missed.

1. The Iron Giant. 2. A robot evocative of a Transformer, a Robocop Mech, or a Cylon holding a lightsaber. Actually, our readers say this is a Gundam. 3. Art3mis dressed as Laura Croft from Tomb Raider. 4. The DeLorean from Back to the Future. 5. Red-pulsating light from Knight Rider. 6. Wade posed roughly like Marty in Back to the Future. 7. Han Solo’s pants from Star Wars. 8. A Skeletor-ish creature. 9. Star Wars-esque ship 10. An Eighties monster truck. 11. Space Invaders, a popular Eighties arcade game. 12. Ben Mendelsohn’s tie seems to say “OASIS.” 13. Wade’s raised arm and glove are like Judd Nelson in The Breakfast Club. 14. The Stacks: the towers of old cars where Wade lives in the real world. 15. Anorak, AKA, the avatar of OASIS creator James Halliday.

In terms of sly easter eggs, this poster is just the tip of a sentient iceberg that has memorized every single John Hughes movies and likes to sing Smiths songs at Karaoke. When the movie comes out, the list of Eighties references will possibly be longer than the Ernest Cline novel on which the movie is based.