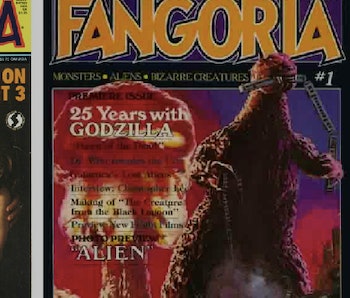 Proving that you just can’t keep a good demon down, the once-essential horror magazine, Fangoria will make a triumphant return as a glossy print publication in October. Publication company Cinestate has acquired Fangoria and will restore it to its former blood-and-gore glory.

On Thursday, Cinestate announced that it has acquired Fangoria with the intention of resurrecting the defunct publication into a quarterly print enterprise again. Here’s what the official press release declared:

Fangoria Magazine is returning from its digital grave and back into print where it belongs. Thanks to a new investment, a new Editor-in-Chief, and a new Publisher, the world’s highest-profile horror movie magazine is reemerging as a collectible quarterly with the first issue set to drop this fall in time for Halloween.

First published in 1979, the magazine Fangoria was actually a companion publication of the famous science fiction and fantasy magazine, Starlog. Though initially conceived as a fantasy-based magazine to balance out the mostly all science fiction coverage in Starlog, Fangoria eventually pivoted to only covering horror in its seventh issue. The magazine ceased publication in early 2017, after having been digital-only for several years.

The new Fangoria has hired Birth Movies Death writer/editor Phil Nobile Jr. as its editor-in-chief. It is not being created as a digital publication and will definitely be focused on print. According to Nobile, “We want to restore that analog thrill to readers. We want to duplicate the excitement that I remember bubbling up around a new issue of Fango, put that excitement in an envelope and mail it to our subscribers. Fangoria is not something that competes with online blogs. Fangoria is not an algorithm. Fangoria is something you hold in your hands, something you spend a bit of time within the real world. That’s what it was for decades, and that’s what we’re going to make it again.”

Cinestate has also acquired “assets and trademarks” to Starlog, though no word has been given yet if that iconic genre publication will return to print, too.