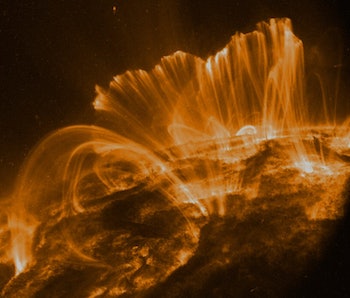 Time to batten down the hatches, as there’s a solar storm a-brewing. A flare has ejected charged particles from the sun, and they are projected to hit Earth sometime Thursday or Friday.

The National Oceanographic and Atmospheric Administration monitors space weather events, and it announced Thursday that flare activity from February 12 will soon reach Earth. The stream of particles should be strong enough to form a geomagnetic storm, albeit a weak one.

NOAA has classified the incoming activity as a G1, or minor, storm. The agency’s alert says there could be some effects, including the auroras being visible in lower latitudes than normal — in the United States, the northern lights might be visible in Michigan and Maine — and some disruptions to satellite activity and power grids.

How bad could the disturbances be? Certainly, there are instances where severe solar storms have crippled power grids. A storm in March 1989 knocked out the power throughout Quebec, leaving six million people without power for several hours.

We haven’t had any other massive storms during the current technological era, though storms in the 19th and early 20th century disrupted telegraph lines and sometimes even gave their operators nasty shocks. The most severe storm in recorded history, the Carrington Event of 1859, would have likely wrought havoc on our modern grid if it had existed then.

Thankfully, we’re not dealing with a Carrington- or even Quebec-like storm. A G1 storm is the equivalent of a five on the K-index, which is a measure from zero to nine of disturbance to the Earth’s magnetic field. Five isn’t nothing, but it’s the lowest value that actually counts as a geomagnetic storm.

Since the K-index is logarithmic, each next value is 10 times more powerful than the one before it. The Quebec storm reached as high as nine on the K-index.

Even then, though, the Quebec blackout was a bit of a, well, perfect storm. The power company Hydro-Quebec investigated afterward and found Quebec’s rocky geology and the company’s reliance on very long transmission lines made it especially vulnerable to such a blackout. Hydro-Quebec also took protective measures to better handle extreme power fluctuations, and the company points out subsequent storms have had no effect on the grid.

All things considered, we should all be fine as this storm passes — but that’s just an extra reason to stand in awe of how we make our routine our precarious existence in the perpetual shadow of the sun and its volatility.

More like this
Science
Sep. 18, 2022
The Solar System could be littered with alien artifacts — even on Earth
By Seth Lockman and Universe Today
Science
10 hours ago
Mysterious new deep-space radio burst may have extreme origins — study
By Jeff Nagle
Science
9 hours ago
Behold! 9 glorious Neptune images reveal our changing view of the planet
By Jennifer Walter
Related Tags
Share: