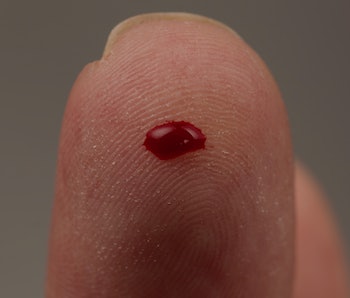 A quick test for Ebola that requires just a prick of blood and 15 minutes appears to be an effective way to diagnose the virus. In a field trial of more than 100 patients, as well as an evaluation of 284 lab samples, the test had 100 percent sensitivity (no false negatives) and 92 percent specificity (not many false positives), researchers reported in the journal Lancet on Thursday.

The numbers are impressive, but might be off, Boston Children’s Hospital infectious disease doctor and study author Nira Pollock told Science. The reason? The Ebola gold standard for diagnostics — RT-PCR — that was used to corroborate the finger prick test itself isn’t 100 percent accurate. There’s also concern that patients who are infected but don’t have high concentrations of the virus might be missed, the scientists cautioned.

But compared with PCR, the finger test takes much less time and blood. The PCR test requires a machine priced at a few thousand dollars, at least three to four hours, and, crucially, electricity. The prick test costs about $15 and can be done outside a lab. Ebola isn’t contagious until symptoms occur — but once someone develops those symptoms, he or she will infect two other people, on average. Easy ways to cut off Ebola tranmission at the source — by isolating infected individuals — could keep the next outbreak from wreaking such devastation.

Here’s how the test works, via a press release:

The ReEBOV test uses a drop of blood from a fingerstick performed with a safety lancet, which has a spring-loaded mechanism that prevents health care workers from receiving accidental needlesticks after the blood is sampled. The ReEBOV test works similarly to a home pregnancy test: the sample is applied to a treated strip, and if the sample is positive for Ebola, a colored line appears on the strip at a specific location.

New ways to diagnose and treat Ebola are currently in various stages of development. The World Health Organization hopes to see a vaccine by the end of the year. They won’t come fast enough: the WHO reports more than 11,000 deaths during the current outbreak that began in West Africa last year — the disease is still in widespread transmission, according to the Centers for Disease Control, in Guinea and Sierra Leone.

More like this
Mind and Body
Oct. 1, 2022
How important is breakfast, really? A health expert explains how to do it right
By Elana Spivack
Mind and Body
Sep. 28, 2022
A new viral cousin of Covid-19 can resist vaccine immunity, study finds
By Miriam Fauzia
Mind and Body
Sep. 26, 2022
Why you shouldn't sleep in on the weekend (sorry)
By Katie MacBride
Related Tags
Share: