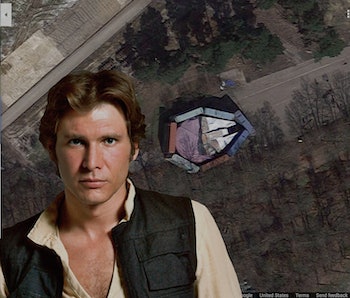 The Star Wars galaxy might be far, far away, but that didn’t stop somebody from parking their YT-1300f Corellian light freighter somewhere south of England. That’s right, you can still spot what looks like the Millennium Falcon on the Google Maps Satellite view right here on Earth.

On Friday, someone on Reddit offered up a reminder that the Falcon was hiding in plain sight at Longcross Studios, a production location in the South East region of England.

Anyone can find it by going to the following address on Google Maps:

The ship itself is almost directly east of the Longcross Studios location marker, just southeast of Chobham Ln and fairly close to Barrow Hills Golf Club. In fact, you might have an easier time finding it if you go to “Barrow Hills Golf Club, Longcross Rd, Longcross, Chertsey KT16 0DS, UK” and then just look slightly northwest. It’s partially covered and surrounded by shipping containers.

The ship we can still see on Google Maps seems like the “original” that’s been in every movie so far with a fork-like front section. Which is noticeably different from when it’s brand-new in the upcoming Solo: A Star Wars Story.

Perhaps the earliest photo of the ship parked at Longcross Studios is supposedly from March of last year, but it resurfaces on the internet every few months. It happened in June 2017, and then again in November, perhaps as a fun reminder leading up to the release of The Last Jedi.

And now, fresh off the heels of the Solo trailer, interest has surged yet again.

It’s only a matter of time before some scoundrel flies away with the thing.

Go ahead and rewatch the trailer for the movie, because you know you want to.