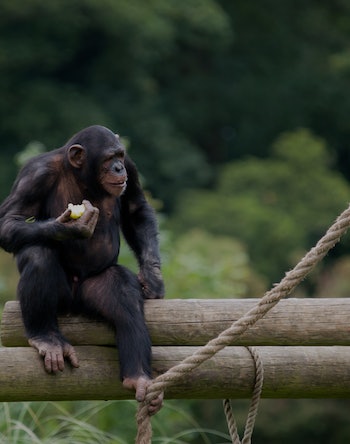 The rush of joy we get from a measly Instagram like is a frightening thing. Our addiction to instant gratification from our smartphones and tablets has raised red flags for many psychologists, who worry that it’s damaging our ability to appreciate delayed gratification and self-control, rendering us all impulse-driven slaves to our screens. Fortunately, a new study on some very disciplined chimpanzees suggests that our ability to exercise restraint has much deeper evolutionary roots than our worsening smartphone addictions may suggest.

In the paper, published in Current Biology on Thursday, a team of psychologists led by Georgia State University psychologist Michael Beran, Ph.D., show that chimps’ ability to exercise restraint is linked to their general intelligence, just like it is in humans. Though previous experiments had shown that chimpanzees could sometimes exert self-control and delay gratification, their ability to do so was attributed to environmental factors. Now, the link between self-control and intelligence suggests that willpower played an important role in chimpanzee — and human — evolution.

“From this, we have argued that delay of gratification, as part of a broader capacity for behavioral inhibition, reflects a form of controlled cognition,” Beran told Inverse in an e-mail. “This is in line with how we tend to think of self-control in humans.”

“This is in line with how we tend to think of self-control in humans.”

One of the most famous forays into the mechanisms behind human willpower was the “Marshmallow Test” experiment at Stanford University in the 1960s, in which children were given the option to eat a single marshmallow on the spot or to wait and eat two later. The smarter kids — those who scored higher on general intelligence tests — were willing to wait for the better reward, illustrating an underlying link between self-control and intelligence. Now, Beran’s study shows that the same link underpins the self-control of chimpanzees.

He and his co-author William D. Hopkins, Ph.D., used grapes to adapt the Marshmallow Test for the 40 chimpanzees involved in the study, calling the new test the Hybrid Delay Task. The chimps were presented with two piles of grapes, one containing four and the other 12; training taught them that they could eat the four-grape pile immediately if they pointed at it, but if they pointed at the pile of 12 grapes, they’d have to wait. The idea was that the more intelligent chimps would not only recognize the value in waiting but have the will power to actually do it, resisting the urge to give in and eat the four-grape pile instead.

The ones that are able to do so scored higher on the Primate Cognitive Test Battery, which measures chimps’ general intelligence through tests of their social, cognitive, and reasoning skills. As the team expected, the really intelligent chimps didn’t just choose the delayed reward but also waited well for that reward, resisting the temptation of the smaller but readily available pile of grapes.

The results of this test, Beran explains, “showed that some chimpanzees, some of the time, can wait long periods of time to get a better reward than what they have right now.”

“From an evolutionary perspective, the present data suggest that this relation has, at minimum, a shared origin within humans and apes.”

The ability to wait well is the observation on which this entire study hinges, as it suggests that the chimpanzees have some degree of controlled cognition — what we would call “willpower.” Beran has observed similar behavior in previous experiments, like the self-distraction study, in which chimps were similarly presented with a pile of food that grew bigger as long as the pile was left untouched. What was remarkable was that some of those chimps didn’t just wait patiently for more food but also distracted themselves with toys while waiting, especially when the delay was self-imposed rather than enforced by the experimenters. While we can’t purport to know what was going on in their heads while they did so, we can infer from our own experience that doing so might have made the waiting more bearable.

“We argued this use of toys was strategic, not incidental to simply having to wait for food,” says Beran. “This, too, showed a strong parallel between the behavior of chimpanzees and humans.” But it’s only in the new study, he says, that this behavior has been linked to general intelligence.

Of course, intelligence isn’t the only factor that determines whether a chimp — or a human, for that matter — can exercise self-control. While Beran can now say that variations in intelligence likely underlie the individual differences in each chimp’s ability to exercise restraint, he points out that the context in which the reward is presented still plays a huge role. “For example, you wait a lot longer when marshmallows are thought of as ‘cloud-like soft fluffy things’ rather than ‘gooey delicious, sugary things’,” he says, referring to Marshmallow Task kids who were more willing to forgo eating when they didn’t focus on the “appetitive” qualities of their rewards.

“So, no matter how you score on a general intelligence test, there are some contexts that are just going to make it harder than others for you to wait,” he says.

In this age of seemingly declining human self-control, there’s something comforting in knowing that our ability to exercise restraint is not so much learned as it is — at least to some degree — innate. “From an evolutionary perspective,” the researchers write in the paper, “the present data suggest that this relation has, at minimum, a shared origin within humans and apes.”

Something about willpower was so necessary to the survival of our common ancestor that the genes underlying it persisted in our DNA throughout chimp and human evolution. The link between self-control and intelligence in non-human animals, the researchers explain, “likely reflects something foundational about the role of inhibitory, cognitive processes in general intelligence. How they manifest remains unclear, though they say it’s likely that “self-control and intelligence have a common, but as of yet unidentified, neurobiological foundation within chimpanzees.”

This should come as no surprise, considering how crucial the ability to delay gratification is in the day-to-day lives of chimps and humans alike. While for most of us, delayed gratification often takes the form of resisting snacks to achieve our dream physiques or saving money now for a comfortable retirement later, it really is crucial to survival on the most basic level of existence.

“Imagine a lower ranking animal that is desperate to mate with a receptive partner, but more dominant individuals are around,” Beran says. “Rather than charge ahead at the risk of being punished just to satisfy that urge, waiting until the coast is clear will work better (and, it just might increase the chances of keeping your genes in the pool!).”

Last year, University of California at Santa Barbara researchers, concerned that human children were getting worse at self-control, plotted the results of 30 years of Marshmallow Tests onto a grid, just to find out for sure. The results baffled the researchers, showing that kids not only didn’t get worse but actually improved at the task. One compelling explanation for the unexpected result was that kids are scoring higher on IQ tests than they used to — which, bearing Beran’s new work in mind, suddenly seems a lot less surprising.

“[I] think there is clear selective pressure for being able to compare present and future options, choose between them, and then (perhaps most crucially!),” he says, “being able to stick with the plan.”