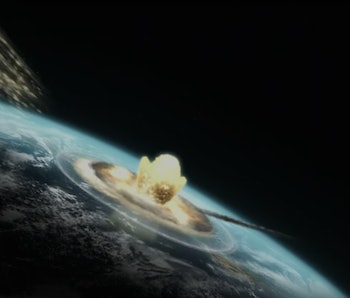 On Friday, a small asteroid called 2018 CB will safely whiz by Earth, posing absolutely no threat to humanity. It will get pretty close to our pale blue dot, however, giving Earth a much-needed hug.

According to NASA, the asteroid will pass our planet at around 5:30 p.m. Eastern (2:30 p.m. Pacific) at a distance of about 39,000 miles (64,000 kilometers). That’s only one-fifth of the distance between Earth and our moon, making this a pretty close encounter. Still, the asteroid is just a smol boy — it’s likely between 50 and 130 feet (15 and 40 meters) in size. It’s like a flying kitten, minus all the biting and scratching.

“Although 2018 CB is quite small, it might well be larger than the asteroid that entered the atmosphere over Chelyabinsk, Russia, almost exactly five years ago, in 2013,” Paul Chodas, manager of the Center for Near-Earth Object Studies at NASA’s Jet Propulsion Laboratory in Pasadena, California, says in a press release. “Asteroids of this size do not often approach this close to our planet — maybe only once or twice a year.”

Surprisingly, 2018 CB and another asteroid that passed us this week — 2018 CC — were discovered on Sunday, February 4. Both were spotted by astronomers at the Catalina Sky Survey (CSS) in Arizona.

For those hoping to get whacked in the face by an asteroid: I’m sorry. This tiny asteroid means no harm — it just wants to take a close peek at Earth and then pass onward into the void.