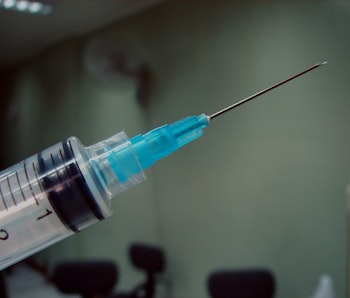 Capital punishment is on death row. Many of the compounds used to synthesize lethal-injection cocktails are now unavailable in the US, causing state governments to go on the world’s most depressing treasure hunt for substitute drugs. One of those drugs is pentobarbital — and increased demand has fostered the creation of a bizarre purchasing process that boils down to states scoring drugs off a street dealer.

Fresh out of C11H17N2NaO2S, several states — most notably Texas — began using pentobarbital instead. This made sense as pento’s anesthetic mechanism is largely the same as sodium thiopental’s: Both drugs cross the blood brain barrier with little trouble, stimulating neuronal receptors that leads to slower brain function and suppresses cell activity. But, while sodium thiopental works fast, pento is slower and more intense, and its effects on humans have not been thoroughly studied or documented.

Texas has now become something of a pento addict — and for understandable reasons. The Lone Stars are reluctant to switch to something else because the states that have tried other compounds during the sodium thiopental shortage have gotten some deservedly bad press for horribly botched executions occur. In perhaps the most infamous incident, Oklahoma death row inmate Clayton Lockett was supposed to die within ten minutes of being administered an injection containing midazolam. He ended up writhing in pain for 43 minutes before finally expiring.

Rather than risk torturing dying men in front of aggrieved onlookers, states have gone to extreme measures to stockpile pento. The Missouri Times reported last August that in an effort to acquire the stuff, the Missouri Department of Corrections gave an official $11,000 in cash, had him drive over the border into Oklahoma, buy what he could from a secret source and hand-deliver it to the DOC. When the public caught wind, the state turned to a different supplier whose name and affiliation is also shrouded in secrecy.

All of this is actually legal under Missouri law, which ensures the anonymity of members of execution teams and individuals who provide lethal injection compounds. Oklahoma, Georgia, Louisiana, and Texas have similar laws designed to mitigate the possibility of intimidation or revenge that leave the door open to a very opaque — if not black — market.

Luckily for Texas, the state was able to purchase more pento last month from an (you guessed it) unidentified source. Texas Department of Criminal Justice spokesman Jason Clarke only told Salon that the source was “a licensed pharmacy that has the ability to compound.”

In order to keep the death train rolling, the legislative branch has also passed a bill that will keep secret the names of companies that produce lethal injection drugs as well as the individuals do the actual work. If signed, it would allow companies to publicly have their cake and privately eat it. It remains unclear whether or not any companies would avail themselves of that opportunity.

Cynicism about corporate greed aside, the new laws might eliminate the need to send a dude into the desert late at night to bring drugs back over the state border. On the other hand, there are strong concerns they could also engender poor oversight for the safety of these chemicals. Pharmaceutical companies already wield an intense amount of power in the US, and giving them anonymity in this instance could lead to anonymity in other circumstances.

Regardless of whether the bill becomes law, we should all expect the practice of death by lethal injection to change significantly in the next few years. It is conceivable that the debate over state-sponsored killings will become technical and medical rather than moral in nature. Even people who fervently believe in the value of the ends may not be comfortable with the mysterious means.