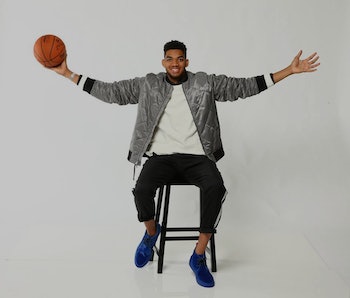 In an era where the NFL Draft has become a huge primetime draw — despite the fact that it is boring and bad — the NBA’s draft has usually been viewed as the little brother. But why? It’s got all the ridiculous posturing and dealmaking of the NFL, but it’s quicker, infinitely more mysterious, and the parallel Twitter dialogue is way weirder. As the NBA grows in popularity, year-in, year-out, I think it’s time for the NBA Draft to claim its rightful top dog status as a piece of programming.

Before I begin, I’d like to provide an answer to a common question: Do you have to know who any of the players are to find the draft and its inlaid story lines? The answer is, hell no. I watch college basketball all the time and I still don’t know anything about half the guys involved in tonight’s draft and that’s not even including the foreign guys, who nobody knows anything about. That’s sort of the point.

Since the NBA has grown into a bigger and bigger business, the 30 teams are much more businesslike in their dispersal of information. Meaning: In the months up to the draft, everyone is lying their asses off in a pretty hilarious way. Phil Jackson says he’s thinking about trading the Knicks pick — which is the fourth pick in the draft, literally the most perfect pick because they will likely get whatever player is left over in a draft with four or five good players — or they might pick Frank Kaminsky, a center who is a reed but can shoot, instead of a potentially league-changing guard. He’s either lying or insane, but probably not both.

Sam Hinkie, the Sixers exec who is deploying Goldman Sachs-style ruthlessness into his team-running, is saying even less. So much smoke, so many mirrors, it’s great, and people still end up doing dumb stuff and picking a guy who never ends up being a meaningful NBA player high in the lottery.

In an era where NBA players increasingly view themselves as fashionable, the NBA Draft gives selectees an opportunity to stunt on their peers. For instance, take Andrew Wiggin’s suit from last year — he wore a pattern designed for furniture, but he decided to make a suit out of it. In recent years, there’s been a number of innovations with respect to suit linings. For the first time in their careers, these young men are encouraged to show out, and they err on the side of going big.

Even if rumored megadeals have a way of never going down — this year’s dance involves Kevin Love, DeMarcus Cousins and Dwyane Wade, all of whom probably aint going anywhere — the NBA Draft is full of general managers taking the mystery guy with the most “upside.” This year’s guy is Kirstaps Porzingis, a Latvian seven-footer who can handle, shoot and defend (allegedly, I should say that for legal purposes). Does anyone really know how good this guy can be? No, but it’s fun to imagine!

When you’re trying to fish for a franchise player, your imagination has a way of filling in some of the blanks. It’s not mistake that the worst, dumbest teams usually pick at the top of the draft, and those teams really love to swing for the fences. Why draft a 6’4” proven scorer from Notre Dame when you could take a guy who could be Dirk Nowitzki mixed with Dwight Howard mixed with Monstar Charles Barkley, at least in theory? No-brainer! Occasionally, a draftee who wasn’t invited to the green room buys a ticket in the stands and wanders down to pick up his bad team hat. It’s unpredictable as hell, and it’s an institution.

Above all, the NBA Draft is a night of chaos where young men who arbitrarily aren’t allowed to earn a check until they’re 19 have their fates decided by a cabal of much older men who maintain wildly varying opinions on talent and branding. The fact that this works out for anyone is sort of mindblowing. Watch it live, tonight, on ESPN.