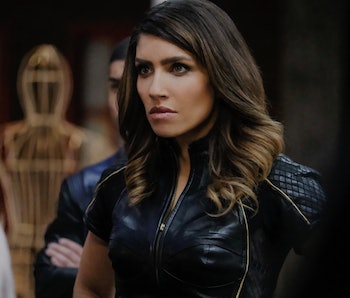 Cayden James has been after the Green Arrow, and in “All for Nothing,” we find out why. And, it may be a pursuit that really meant nothing. Meanwhile, Arrow says goodbye to one of its major — let’s say, frenemies.

Spoilers for Arrow ahead.

In “All for Nothing,” Star City is a week into Cayden James’s (Michael Emerson) occupation. Remember Gotham City after Bane took over in The Dark Knight Rises? That’s basically how Cayden James is controlling the city, cut off from the rest of the world. Desperate to shake off Cayden James’s stranglehold of the city, Oliver Queen (Stephen Amell) temporarily re-teams with Dinah (Juliana Harkavy), Rene (Rick Gonzalez), and Curtis (Echo Kellum).

But the biggest focus of the episode is actually Vincent, a.k.a. Vigilante (Johann Urb). Arrow’s flashbacks returns this week, giving viewers a look at how Vincent and Dinah met undercover before falling in love on the job. Five years later, Vincent is now double teaming Cayden with the Green Arrow, but like his undercover gig, it all goes belly up.

After Cayden tortures Vincent just because he’s plain fascinated by his regenerative factor, the heroes try to break Vincent out until he’s pushed by Black Siren’s Canary Cry into an exposed pipe. Vulnerable, Cayden James orders Earth-2 Laurel to kill Vincent in one of the most bizarre deaths in Arrow history: Yelling into his ear, essentially destroying his brain with pure vibrations. It’s absolutely mental, so to speak. It was straight out of a horror movie in a show with a super high body count.

Cayden’s grudge with the Green Arrow may be all based on lies anyway. After Vincent’s death, Felicity and her old Helix pal discover security footage of the Green Arrow killing Cayden’s son, Owen. Except it never happened. The evidence is bogus.

Someone is trying to pin Owen’s murder on the Green Arrow, for a reason no one knows. Luckily, the footage’s signature — whatever that means — is a match for the doctored photo that made Oliver Queen look like the Green Arrow earlier in the season. (Remember that Bruce Wayne reference? That photo.) It seems even a master hacker like Cayden James is getting played, but who? And why?

Until those answers are made clear, Dinah will embark on a warpath against Cayden James for his murder of Vincent. Knowing what she’s capable of, I’d be very afraid.