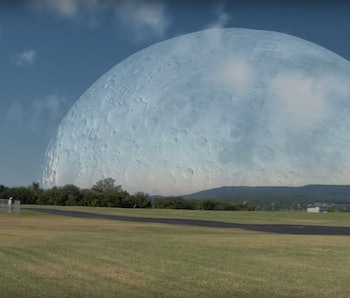 So it’s pretty tough from down here on Earth to imagine just how expansive the moon actually is. Well, you don’t have to anymore. Animator and amateur astronomer Nicholas Holmes runs the Youtube channel Yeti Dynamics, where he posts videos demonstrating how certain planets would look if they were much closer to Earth.

In this video he swaps the International Space Station, which is 254 miles from Earth, with the moon, which is about 238,900 miles away. The results are absolutely epic and more than a little terrifying.

Not so much of a distant little cue ball anymore, huh? Now it’s looking more like Marvel’s planet-devouring Galactus, here to swallow us all whole.

The moon is 6,783 miles in circumference. That’s roughly double the distance you would need to drive to get from Miami to Seattle. To walk all way at the leisurely pace of 3.1 miles per hour, it would take about 91 days of continuous walking, based on some calculations by Quora user Loring Chien.

At this distance, the moon would also rise in the west and set in the east, according to Holmes’s notes in the video’s description. That’s because the moon would orbit the Earth so quickly — somewhere between 130 and 90 minutes — that it would outpace the Earth’s rotation.

Also, the gravitational forces that the moon has on the oceans would certainly increase exponentially, leading to some seriously high tides.

Good thing the moon isn’t this much of a clingy satellite.

More like this
Science
Jan. 22, 2023
The oldest paintings ever found on Earth were not made by humans — research
By Paul Pettitt and The Conversation
Science
Jan. 19, 2023
Future humans may not be able to see the stars from Earth — study
By Kiona Smith
Science
17 hours ago
This nuclear-powered X-ray “flashlight” may help scientists probe the Moon for water
By Andy Tomaswick and Universe Today
LEARN SOMETHING NEW EVERY DAY.
Share: