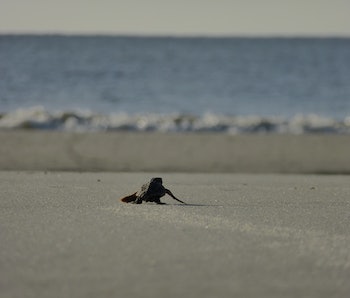 In September 2017, Hurricane Irma crashed through the Caribbean and hit the United States. The devastating storm caused billions of dollars in damage to people’s homes and businesses, and Many Puerto Ricans are still without power.

A little piece of ecological hope and excitement has risen from the destruction, though. In the wake of the storm, researchers found that Blackbeard Island, a small, federally-protected island just off the coast of Georgia, had become two islands. Irma washed away a narrow spit of land, isolating about 100 acres of Blackbeard Island and creating what officials are now calling Little Blackbeard. Far from an ecological oddity, though, this kind of rapid change is quite normal for coastal islands. In fact, future hurricanes could make this type of change more common.

“Islands are formed and wiped away a lot, especially during storms,” Chuck Hayes, a wildlife biologist with the U.S. Fish and Wildlife Service, tells Inverse. “If we start having a lot more storms like Irma, we’ll start seeing a lot more erosion on the beaches and stuff like that. It can push sand up and form little bars that could be wiped away the next year, or it could — like it did for Blackbeard — split an island in two. It’s a really dynamic system along the coast. We were not surprised to see Blackbeard split like that.”

For the most part, Hayes says, the islands’ split won’t affect the animals that live there. Raccoons and other inhabitants of Little Blackbeard will be able to walk across the sand during low tide, as will Fish and Wildlife Service staff on their daily checks for loggerhead sea turtles making their nests.

“We like to run the beach every day to check for turtle crawls,” says Hayes, and the island rift means that they’ll need to shift their routine so they can get over to Little Blackbeard during low tide. “At dead low tide, you can walk from Blackbeard to Little Blackbeard, but it doesn’t take long — and I’m telling you because I got caught over there — it doesn’t take long that you’re messing around on that little island, you come back, and the water’s too high and coming in too fast for you to cross back over.”

The island split could cause issues for loggerheads too, though. Blackbeard Island hosts one of the highest numbers of sea turtle nests on the Georgia coast, but about a quarter-mile of beach that was nesting habitat for loggerhead sea turtles is now gone. Hayes says he and his colleagues don’t know whether the turtles will pack into the smaller available space or simply find somewhere else to nest. They won’t know until at least halfway through the nesting season, which begins in mid-May, how much the turtles are being affected by the island breach.

“It may not affect them at all. We may get the same number, and they may just shift their movements,” he says.

Just like it’s hard to tell what the turtles will do, it’s impossible to predict how future large storms will affect Little Blackbeard. The small island could rejoin Blackbeard Island, it could get bigger, or it could be totally washed away.

“If we get one like Irma again, or even more powerful than Irma, it could push a ton of sand up in there and close everything off, or it could not do anything, or it could wipe that little island completely off the face of the Earth. It’s dynamic, unpredictable, but it’s really cool to see how things change,” says Hayes.

“It’s just part of the natural process. That’s all it is.”

This man-made island could be the hub for thousands of wind turbines.